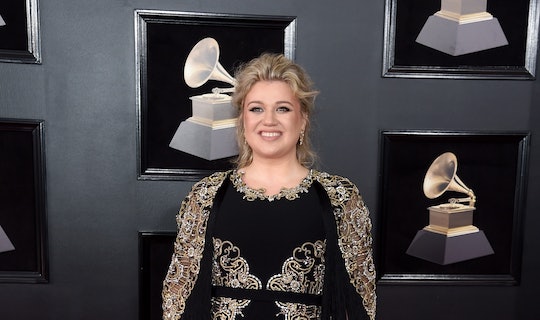 Building self-esteem is an important part of a parent's responsibilities to their kids, so on its face, it might seem odd that Kelly Clarkson won't call her daughters "pretty," but she's actually got a really good reason for banning the word, and in fact, 16-year-old Savannah and 3-year-old River Rose are probably going to end up feeling more confident in themselves because of Clarkson's method. "Anytime our little girl — our 3-year-old — walks in, everybody's like, 'You’re so pretty!'" Clarkson told People. "I don't mind her being pretty, I don't mind people saying it, but I don't want her to get boxed into that."

It's disingenuous to say that appearances don't really matter, because as much as we might wish the world worked that way, it just doesn't. It's fine to want to look good, and to appreciate when others do, but the problem is that girls' and women's beauty is disproportionately valued in a way that's never applied to boys and men. So while Clarkson's girls are getting all the validation they need from others in the looks department, she feels it's important to reinforce the idea that they're more than that, and praise them for their other positive attributes.

Ironically, it was during an interview for People's annual "Beautiful Issue" that Clarkson lamented the way that princess movies teach girls to aspire to be beautiful above all else. "I'm not one of those people that's like, 'I hate princesses.' I think they're awesome, I know all the songs," Clarkson conceded. "But I make a point to always say other adjectives." For example, she said, she'll instead tell her girls that they're rad, stylish, cool, or unique.

It's an important lesson for her toddler as she grows up in a world that socializes girls to be "nice" and "pretty," while boys are encouraged to display more interesting traits, like intelligence, courage, or a good sense of humor. But it's also a good thing for her teenage stepdaughter, as she comes of age in a world that objectifies girls before they're even old enough to understand it. Sadly, at her age, Savannah may already be feeling the effects; one study found that one in 10 girls are cat called before their 11th birthday, according to Girl Scouts of the United States of America.

And while in most facets of life, being objectively good looking is an asset, it can actually be a disadvantage when it comes to street harassment, or even just being seen as a fully-formed human being by well-meaning teachers, neighbors, or relatives. "Especially our oldest girl, she's like model-worthy gorgeous," Clarkson told People. "You know all the things that she is, but maybe not everybody says all the time because she's captivating." While people might be impressed with a girl's grades or sense of humor or compassion, if they're only mentioning her looks, she'll begin to think they see her as one-dimensional, and even worse, she might begin to think of herself that way.

Before you write this off as P.C. nonsense, take a moment to listen to what girls actually have to say about it. Another study by the U.K.'s Girlguiding (the British Girl Scouts, basically) found that girls as young as seven felt the effects of gender stereotyping, according to the Guardian. Polling revealed that 55 percent of girls ages 7 to 21 felt they couldn't speak freely because of their gender. Another 57 percent said it affected what they wore, and nearly half reported gender bias having an impact on their participation at school. And they're internalizing it, too; 42 percent of 7- to 10-year-old girls surveyed said that boys were better at "being strong" than girls were. If you really want to make a girl feel good about herself, ignore her hair and praise her strength, instead.