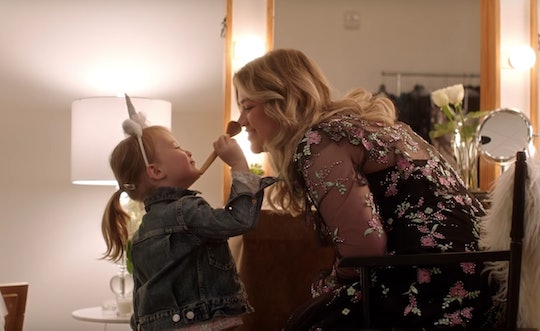 Kelly Clarkson has been a longtime champion for wellness, self-love and acceptance, which makes her latest job penning the theme song for the upcoming Ugly Dolls movie that much more fitting. However, perhaps the sweetest part of all is that Clarkson's daughter River Rose makes the cutest cameo in the song, "Broken & Beautiful," and it will surely bring a tear to your eye.

The song, which is about celebrating flaws and knowing that we can all at once be imperfect and yet still loved and valued, features Clarkson backstage preparing for a performance, while singing that she's done with trying to live up to other people's expectations. During the bit, she's met by daughter River, who helps her pick her outfit, and put makeup on. It seems that she's also sending the message to River herself, which makes it all the more heartwarming.

The music video goes on to show Clarkson getting on stage belting out her power anthem, greeted by one of the animated characters from the film. The video is a mix of live-action and animation, too. It closes with her dancing with River in her arms, celebrating life and love and self-esteem. Yes, it's seriously that perfect, and so incredibly well-suited for the movie, too.

In an interview with Jimmy Fallon, as People reported, Clarkson revealed that the song was written by Pink, and she said that she actually didn't hear it before she agreed to sing it. Her husband simply informed her that Pink had written the song and she said: "done!"

Clarkson went on to say her daughter, who is 4, and will be 5 in June, dances and acts in the music video. "I don't know why I'm doing this, I'm creating a kid who will want to be in this industry... They'll pay her a lot of money to be a dentist," she joked.

“I never held my hand out and asked for something free/I got pride I could roll out for miles in front of me,” Clarkson sings in the anthem, which Rolling Stone reported is as sleek as it is inspiring. “I don’t need your help, and I don’t need sympathy/I don’t need you to lower the bar for me.”

Clarkson went on to explain a bit more about the song, and how it fits into the movie. "It fits the movie so well, especially my character," she said. "Even if you're broken, it doesn't mean you're not beautiful." She added in the same interview that a big part of the film is that each of the animated characters is looking for a human, and it's about realizing that you can still find someone perfect for you, even if you are imperfect.

“There couldn’t have been a more perfect song written for the whole theme of this movie,” Clarkson previously told People. “And broken meaning not damaged, broken just meaning everybody’s under construction.” She added it's one of her favorite things she's ever been able to record.

As if all that weren't exciting enough, according to a press release for the film, the soundtrack also includes songs by Nick Jonas, Blake Shelton, Janelle Monáe, and Bebe Rexha, and Wanda Sykes, Gabriel Iglesias, Wang Leehom, Emma Roberts, Charli XCX, and Lizzo all lend their voices to characters in the movie as well.

Ugly Dolls will premiere in theaters on May 3.

More Like This
28 Taylor Swift Lyrics To Caption Your Valentine’s Day Instagram Post
Blue Ivy Joined Her Mom Beyoncé On Stage To Perform “Brown Skin Girl”
Freeze! The Single From The New 'Bluey' Album Just Dropped
The Purple Wiggle Is A Total Thirst Trap & Moms Are Drinking Him Up
What Parents Are Talking About — Delivered Straight To Your Inbox