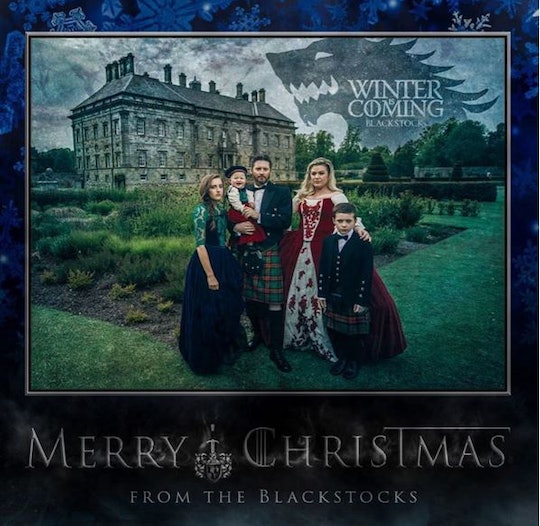 Just a little reminder that Kelly Clarkson is way cooler than you. The star shared her family’s Christmas card on Instagram Tuesday night, and rather than go with the traditional ugly sweaters and cranky children, Clarkson’s Christmas card has a Game of Thrones theme. She and her fam posed dressed like GOT characters, then photoshopped themselves against the background of the grounds of a gorgeous castle. Clarkson posted the photo with the caption, “Winter is Coming.” The greeting features Clarkson; her husband, Brandon Blackstock; their baby daughter, River; and Brandon’s children, Seth and Savannah.

Clarkson, Savannah, and River are wearing heavy gowns, while Brandon and Seth are in kilts. The children and adults all do a great job of looking stoic, but baby River can’t help but smile.The caption reads: “Merry Christmas from the Blackstock clan! @gameofthrones #gameofthrones #winteriscoming #riverisnotworried”

Some fans are speculating that the caption is a hint at the name of Clarkson’s second baby, due next year. As in, they think the baby’s name is Winter. These people probably don’t watch Game of Thrones, which throws that line around more often than Star Wars’ “I have a bad feeling about this.” Also, literally, winter is coming. It’s December. That means that it will soon be winter. Kelly Clarkson’s Instagram was not written by Dan Brown; there are no secret clues hidden in the pictures.

Moving on! Have any other famous people posted Christmas cards on social media? Why, yes, they have!