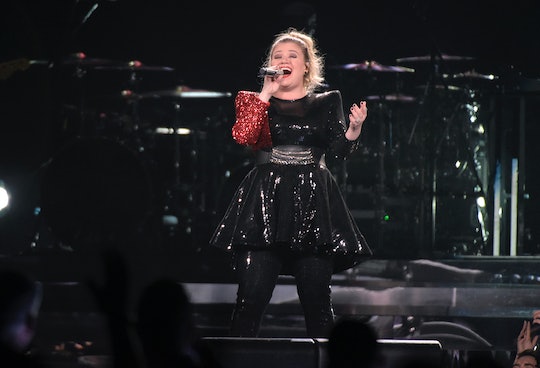 In 2018, A Star Is Born broke the hearts of viewers everywhere. The movie quickly became a favorite for everyone and made people fall in love with the film's star, Lady Gaga, thanks to the song in the movie, "Shallow" — as if they weren't in love with her already. A Star Is Born boasts a lot of celebrity fans, including musician Kelly Clarkson, who covered the song at a recent show. And people need to hear Kelly Clarkson's speech before covering "Shallow" at her concert — because her message is so important (and her performance is really that amazing).

During a recent tour stop in Green Bay, Wisconsin, Clarkson decided to cover the famous, award-winning Lady Gaga and Bradley Cooper duet barefoot, with a glass of wine in hand (because Clarkson is so relatable and one tired mama). During her performance, which was later posted to her Facebook page, Clarkson sang both parts of the duet (and sounds so incredible). The power of her voice is unbelievable and proves why Clarkson is pretty much everyones favorite performer.

But Clarkson's speech before her performance was even more notable than her singing itself. In her little speech, Clarkson highlighted the importance of supporting other artists, rather than pitting them against each other.

In the video, Clarkson talked all about Gaga:

"I hope I don't suck," Clarkson added before launching into her performance. "And if I do, I hope she doesn't see it."

The performance didn't suck at all — it let Clarkson's power house voice shine and pretty much proved why "Shallow" is such a good song. When you hear other people cover it, you really understand the power behind the lyrics (which Gaga also helped write).

But Clarkson's speech before the performance brings up an incredible point — there's no reason to not support or sabotage other women, especially when you have the same interests and the same career. Instead, you should be inspired by their incredible talent.

And people on Twitter are so inspired by Clarkson's talent (when singing Gaga's song). Their reactions are absolutely perfect.

Clarkson is very right — she and Lady Gaga could not be any more different. While Gaga is currently nominated for two Oscars at the 2019 Academy Awards this upcoming Sunday (and could very well take home the statuette for the "Best Song" category this year), Clarkson's life is a lot different.

Clarkson is the mom of four kids with her husband, Brandon Blackstock — two stepchildren and two very young biological children, according to Country Living. While Gaga has her own residency in Las Vegas, Nevada, Clarkson is currently on tour where she is singing barefoot and performing amazing covers. And while Gaga knows how to put on a show, Clarkson knows how to keep it real — her talk show (where she will elaborate more on her life), The Kelly Clarkson Show, will debut on NBC this September, according to Country Living.

But both of the women can sing their hearts out and support each other, and those two things are the best things that anyone can have in common.