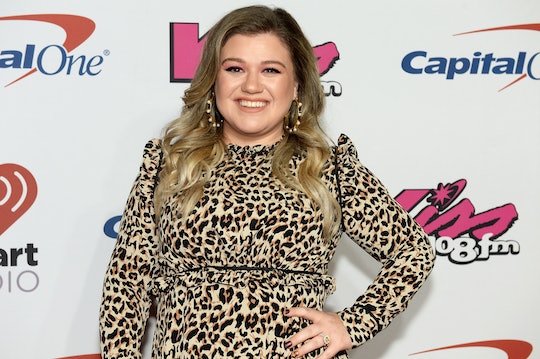 Kelly Clarkson Is Defending Her Choice To Spank Her Kids

Every parent raises their children differently and this is perfectly OK — it is what makes every person and parent so completely unique. From diets to discipline, each parent will tell you their hot takes on these issues, which vary in so many ways, and celebrity parents are no exception to this. Take American Idol season one winner, musician, and mom of two, Kelly Clarkson. In a recent interview, she opened up about disciplining her children and Clarkson's stance spanking actually stems from her own childhood — which is pretty interesting if not a little controversial.

Some people swear up and down that they will never end up like their parents. But you do grow used to the way you were raised. And if you are a fan of your parents, then you probably would hope to emulate their parenting style in some kind of way. Like Clarkson, who spoke freely in an interview with Radio.com, about how she disciplines her kids and where she learned to discipline them. Clarkson said, according to PopSugar:

I'm not above a spanking, which people aren't necessarily into. And I don't mean like hitting her hard, I just mean a spanking. My parents spanked me, I did fine in life, and I feel fine about it. But I do that as well, too.

Clarkson continued in the interview, stating that she was spanked growing up as a child, too. Clarkson said, according to PopSugar:

I'm from the South y'all, so we get spankings. My mom would call the principal if I ever ended up in the principal's office and give permission for her to spank me. I'm a well rounded individual with a lot of character so I think it's fine.

Clarkson even went into more detail, telling Radio.com that she warns her daughter about her bad behavior before she gives her a spanking (so she knows what is coming). Clarkson also added that she is apprehensive to spank her daughter in public, especially in front of other people who might have a problem with it — but Clarkson herself has no problems with spanking her daughter. It is important to note, however, that some studies link spanking to behavioral problems later in life. But Clarkson seems very confident in her decision to spank her child and that is perfectly OK, too.

This isn't the first time that Clarkson has been completely open about parenting her children and was open to criticism about it. In April, fans came after Clarkson for feeding River Nutella on toast. But Clarkson is used to dealing with backlash for her appearance and for the way she parents her children — so it is great that Clarkson feels so comfortable opening up to fans about spanking.

As previously stated, Clarkson has been honest about how she plans to raise her kids and what she is teaching them. And her honesty can help other parents feel less alone or more confident in their decisions to raise their children. Clarkson told People last October that she is teaching her daughter to stand up for herself, speak out when something is wrong, and to look out for others because this is a crucial time in her life. Clarkson said:

I think if we start it at that young age, and you start molding people and growing to these very elevated individuals that help elevate society. It's a really crucial time when you have children right now.

Like teaching her daughter these valuable life lessons and skills, spanking is just another decision that Clarkson has made when it comes to raising her children. Every parent raises their children differently. Clarkson is no exception to this.