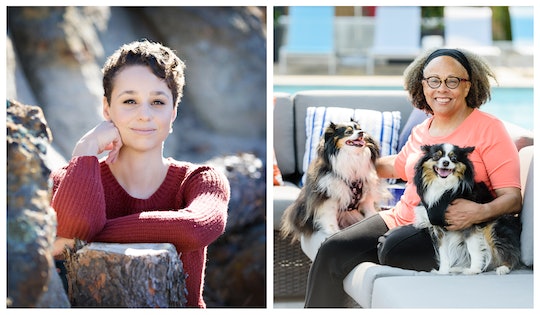 Her Mother Was A Novelist, & Now She Is Too — How They Found Their Voices

by Jewell Parker Rhodes and Kelly Mullen-McWilliams
May 7, 2020

In Kelly McWilliams' new novel Agnes at the End of the World, the hero, Agnes, summons the bravery to leave a cult, only to wander into the world beyond and find it has been overrun by a viral pandemic. She wrote the story well before COVID-19 emerged, inspired in part by her mother Jewell Parker Rhodes' career as a novelist. Rhodes' recent novel Ghost Boys became a bestseller, and she released Black Brother, Black Brother, a middle-grade novel, earlier this year, in the days before the virus was declared a pandemic by the World Health Organization.

Ahead of Mother's Day, the two sat down for a conversation about writing as the mothers of infants, and finding a way to keep their creative work alive. Both were inspired by their daughters to work harder in their fields than they ever had before, and both have found reason to believe that motherhood itself is a creative fuel unlike no other. Here they are in conversation.

On finding your voice as a writer, and the role motherhood played:

Jewell Parker Rhodes: Struggling to find my voice as a black woman writer was challenging for me during the 1970s. I didn’t discover black women wrote books until I was a junior in college, when I found Gayle Jones’s Corregidora on the “New Fiction” shelf in the library. I immediately switched my major to English and began fulfilling my dream of telling stories drawing on my African-American heritage. Yet, I lacked confidence and a community. For years I worked on a novel in isolation. It wasn’t until I had my daughter that my creative energy became focused and more powerful. Writing with an infant in her crib beside me made fulfilling my dreams — REAL. My daughter, Kelly, was the greatest gift.

Kelly McWilliams: Of course, I knew black women wrote books growing up — because my mother was a black woman hard at work right down the hall! It seemed natural me to that she’d be expressing herself and creating other worlds all day long. I felt proud of her. I also knew if I wanted to be a writer, that door was wide open for me.

But it wasn’t until I became a mother that I felt the urgency to create: that work through the night, never give up, burn-the-candle-at-both-ends energy that only mothers seems to have! I never wrote beside my daughter’s crib, but I did write every morning with her strapped to my chest, usually before dawn. I also felt that focusing of energy, which I think is tied up in your realization of your mortality and the sense that you’re not here just for yourself. Nothing gives you purpose like an infant. As a mother, I felt even more engaged in my work because, like all mothers, I want to shape a better world for my child.

JR: Everyone told me when I became a mother, I’d have to give up writing. It appalled me that as a young woman, Kelly was receiving the same motherhood and creativity don’t mix messages that I had decades before. I was glad I could honestly tell you that being a mother made me a better, more empathetic writer.

KM: You told me again and again that motherhood was your superpower as an artist. But the crazy thing was, I never believed you! Our culture is so obsessed with youth — especially when it comes to women. All you have to do is read Little Women to learn the message: parenting and artistic ambition are essentially incompatible. Well, in my 20s I thought for sure I wouldn’t have children — with all the mess and fuss and time commitment. Then I caught a mosquito-borne virus while living in Hawaii and realized: time is short! I had the baby, and lo and behold — my writing picked up speed, urgency, and power. I felt truly focused on my artistic pursuits for the first time in my life. (Sorry, I didn’t believe you, mom!)

On the competing identities of mother and artist:

JR: I was very aware that I couldn’t tell Kelly to pursue her dreams if I hadn’t pursued mine. I had no idea that watching me write, you’d want to write, too. I do remember the profound sense of sharing stories with you. Reading books together was heaven.

I never worried about motherhood “swallowing” or “isolating” me. Because I was abandoned as an infant by my mother, I was eager to embrace being a mom. I used to tell people that if I had to choose between motherhood and a writing career, I’d choose motherhood every time. Gratefully, I didn’t have to make a choice. Having you opened my heart and made me a better writer.

KM: Motherhood in the early years is an isolating, demanding. I knew on an instinctive level that I couldn’t keep it up if I didn’t feed my soul. The warnings about motherhood all make sense: If you’re not careful, the role of mothering can eat your identity whole. So, as you did, I carved out an artistic place for myself. Mothering fed that part of my soul, and it works the other way around, too.

I learned never to feel like writing was a selfish act, because it quickly became so essential. Writing became self-care, in the truest sense.

Stories are also a through-line across generations. They connect us in a way almost nothing else can. I still remember you reading me Tuck Everlasting. I was in the bath while the water got cold and my fingers pruned. You were sitting uncomfortably on the tile floor, reading. We both didn’t want stop until we knew how the story ended. You had probably had a long day, and I was just a kid. But we shared that need to know — how did the young girl in that book shape her life? How did the story end? What lessons were we going to learn? Stories are about imparting lessons, and in our culture, the people who really slay in that department have always been mothers.

JR: And now you’re a mother/novelist and I’m a mother/grandmother/novelist. We create, share stories. We write and try to express life’s emotional truths. Motherhood can be liberating. It can enhance empathy and creativity. Motherhood, despite complaints to the contrary, can help a mom give her dreams shape.

I’m proud of you, Kelly.

KM: I’m proud of you, too! And grateful you kept writing throughout my childhood. You set that example of using motherhood as a lever to propel you forward, rather than as an excuse to hold you back. It made all the difference.

Jewell Parker Rhodes is a New York Times bestselling and award-winning middle grade and adult novelist. Her latest book, Black Brother, Black Brother, went on sale March 3. Kelly McWilliams is a YA novelist. Her most recent book, Agnes at the End of the World, will be published on June 9.