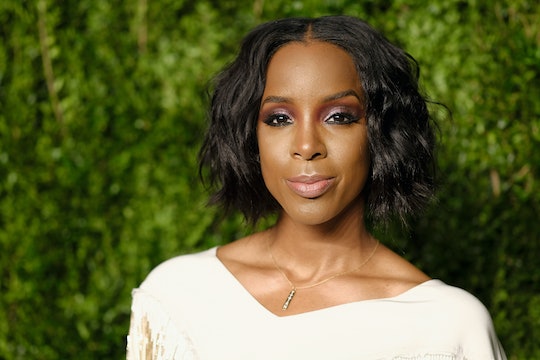 Few people understand the importance of using your voice more than Kelly Rowland. As a singer, coach on The Voice, mother, and author, Rowland has used her voice in many different facets from the day she was born. And there's no stopping her. She's now using her voice to empower new moms with the release of Rowland's new book, Whoa, Baby!, out now, and raise her 2-year-old son, Titan, in a political climate that begs for advocacy and justice for young, black men.

Rowland's book, whose full title is Whoa, Baby!: A Guide for New Moms Who Feel Overwhelmed and Freaked Out (and Wonder What the #*$& Just Happened), approaches motherhood the way it really happens: Googling on your phone with one hand while a screaming baby in the other arm cries out into the dead 3 a.m. night, both of you begging for sleep. Instead of approaching new motherhood in a "Suzy Homemaker" way, as Rowland describes it — see the book cover's visual parody of that archetype — she wanted to fill a void she saw in the parenting book market.

"I couldn't find a book about what happens to mothers [after child birth]. There's everything about what happens to babies," Rowland tells Romper in an interview. With the help of specialists, doctors, and even a woman in a Mommy & Me class that deals with postpartum depression, Rowland says, she was able to write a book that covers the postpartum experience honestly from the perspective of a woman going through it and hopefully doesn't come across as "another celebrity book," she says.

Rowland is proud to admit she doesn't have all the answers which makes her feel relatable when we talk on the phone. While we're both humans (more on that later), she is a famed singer and award-winning personality and I'm, well, neither of those. But, she is just as willing to admit that what she knows about motherhood she learned from "a legion of moms" around her, which is something Rowland has spent her life doing — still considering her Destiny's Child bandmates, like Beyoncé, her family. The most important thing, she's still learning.

"I feel so much guilt from not understanding everything he's saying," Rowland says. "I know he's trying to say something, and I just can't figure it out." Titan, who turns three in November, is learning both English and Spanish, but Rowland says that some of her friends even suggested that he learn American Sign Language. "Well now you freaking tell me?" she jokes. "The worst thing is to not be heard... And I am the type of mother who wants to be in tune to what he's thinking, what he's saying — I always want our lines of communication to be open."

She is also absolutely committed to raising Titan to speak up for himself, no matter the context, even though that can feel impossible sometimes. In April, Rowland told The Daily Beast that her son had watched the Women's March that largely took place in Washington D.C., but also in many cities all around the country. "I made sure my son watched it—and he did, for a second," she told The Daily Beast. "To him it just looked like little dots on TV, but my heart was full. Because that was a lot of women, and we were all on one mission."

The passion behind the Women's March continues when we talk about Black Lives Matter, and the young men who have lost their lives. "I remember when one of the killings happened, one of our boys — I'm saying our boys because I can feel for the actual mother who lost her blood child — my best friend's son kept asking 'What happened, why did they kill him?,'" she tells me on the phone. "So many different questions, and I'm thinking, 'Oh my god, my son is going to ask me these questions that are going to make me completely uncomfortable, but how do I answer him?'"

While that day has not come yet, Rowland actually does have an idea how she'll respond. "You have to be completely honest," she says. "My son also has a huge circle of very smart people around him — people who have a heart and compassion and they're honest and they're from all different backgrounds. That doesn't even matter in our household. We're all just a human race. We have to show our children what honesty looks like, what passion looks like, what authenticity looks like. You have to teach your children all these things, and surround them with people who have the same values."

And you have to teach them that they have a voice.

More Like This
Festive Mommy & Me Holiday Nail Ideas To Try
101 Advent Calendar Activities, From Books To Read To Cookies To Bake
20 Of The Best Christmas Movies For Kids
24 Children's Books For Your Dino-Loving Kid