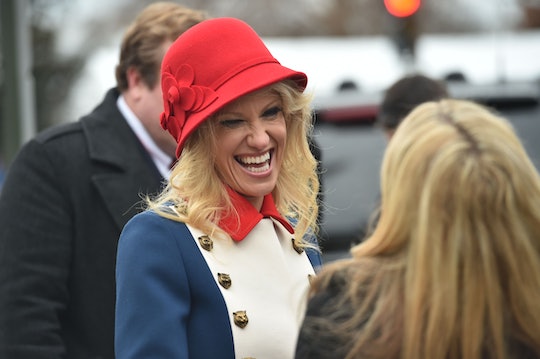 President-elect Donald Trump's senior adviser, Kellyanne Conway, has been spotted at the events surrounding his inauguration in Washington D.C. today. The fashion of the attendees of the event is always noted, and Conway's choice was no exception. On Twitter, Kellyanne Conway's inauguration outfit was met with plenty of jokes and memes, proving that if nothing else, Twitter was very amused.

According to an interview with NBC Bay Area, Kellyanne Conway is dressed in a Gucci jacket that she described as "Trump Revolutionary Wear." Yes, that's a direct quote. And upon closer inspection, according to the Cut, "a close-up view of the coat shows that those buttons are actually snarling cat heads."

Of course, Twitter is poised and ready to make memes out of the day, as they are with any big event, and this was no exception. People on the social media platform took one look at Conway's "revolutionary wear" and immediately got to their best meme-making. Regardless of how you feel, however, Conway shouldn't be shamed for her choice in fashion, and it's clear that most of the tweets and memes were more of the "gentle teasing" variety rather than being truly mean-spirited. Conway will and should of course be critiqued on her views and actions as counsel to the president-elect before anything else.

However, Twitter gave respite to their critiques to mark the occasion with some light-hearted laughs:

People certainly had fun with it. Stephen Leng tweeted, "Kellyanne Conway's inauguration outfit has made my eyes roll back so hard I am now in the past." But how far in the past? As far back as, say, the Revolutionary War?

They just get better and better:

Even The Daily Show got in on the fun:

And people were making plenty of jokes:

Surely someone will follow through on this next suggestion:

Social media always seems to have a way of finding the funny side to things, and today is no exception. So no matter how you feel about today's proceedings, hop on over to Twitter and check out some of the great jokes and memes about Conway's inauguration outfit if you feel like laughing a little.