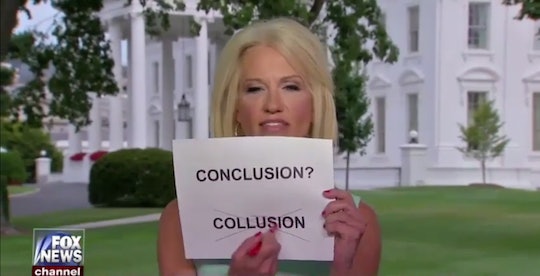 President Donald Trump's senior adviser and unofficial Secretary of Condescension made a big mistake on Hannity Wednesday night. Thursday morning's parade of Kellyanne Conway memes from her Fox News appearance show why you should never, ever pose while holding a white sheet of paper, because that's just asking for trouble. It's like leaving the house without sunscreen or answering an email from a Nigerian prince. Girl, have you even seen the internet or what?

To be fair, maybe she deserved to get turned into a meme, since she basically implied that anyone who's suspicious of the Trump administration's Russian ties is about as intelligent as a 3-year-old. "This is to help all the people at home," she told host Sean Hannity as she held up a visual aid. "What's the conclusion? Collusion? No. We don't have that yet," she said while crossing out the second word (side note: "yet"?). Then, another sheet: "I see illusion and delusion. So, just so we're clear, everyone. Four words: Conclusion? Collusion. No. Illusion. Delusion. Yes. I just thought we would have some fun with words. Sesame's Grover word of the day," she concluded while spitting on Jim Henson's grave. Go ahead and watch it if you like clenching your jaw so hard that you develop microfractures in your teeth.

Or if you'd rather keep your stress level manageable, help yourself to the finest memes that Twitter has to offer:

Never forget those numbers. Or at least the first two digits of each; it's not like we're robots or something.

What are the odds that someone out there would make a meme inspired by my ringtone?

Honestly, my favorite part is that he didn't bother to 'shop out Conway's fingers.

How did she not see that one coming? It's almost as if her signs were perfectly spaced to allow for the extra text. Maybe a rogue assistant printed them?

Prediction: Illusion Delusion will be better, except for that extended version of "Don't Cry."

Oh, Kellyanne, how could you? So rude.

Honestly, I hate that song, but I feel like Conway loves it, so this seems right.

Team Ketchup, and I will never back down from that.

I love that someone is trying to use a meme for good! But I also love jokes, so let's get back to that.

In addition to rhyming, it's actually a pretty solid theory. If you're not sure, stop watching and listening to Conway and Trump speak, and read the transcripts instead.