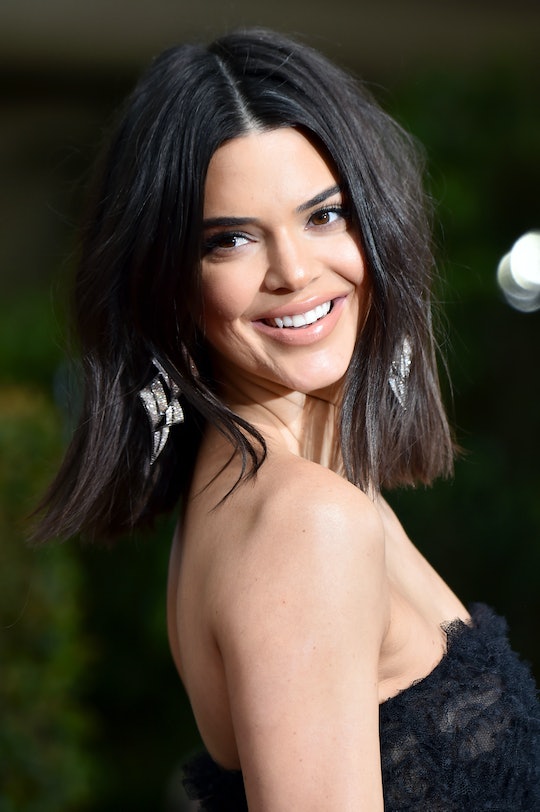 With two confirmed Kar-Jenner babies on the way and a rumored third, it seems like there's a full-on baby boom happening in the family right now. But there's one sister who doesn't plan to add to the family anytime soon. In fact, Kendall Jenner opened up about the idea of having kids during a recent interview with Harper's Bazaar and she made it very clear that while she does see kids in her future, she has other priorities right now.

Jenner spoke with fellow fashion model Cara Delevingne about both her professional and personal life for her third Harper's Bazaar cover story. When the topic of kids came up, Jenner told the publication, "I definitely don’t plan on having them anytime soon. It’s going to be interesting to see what the world is like when I do have kids."

"Bringing kids into the world is a scary thought right now, isn’t it?” Delevingne replied, and Jenner agreed with the sentiment. "It’s super scary," the 22-year-old reality star said.

That's not to say that she hasn't thought about what kind of mother she will be one day. When she does start a family, she plans to closely monitor her children's presence on social media. Despite living in the public eye, she wants to do her best to give her children a normal life, as Jenner explained in the same interview:

I think I’ll definitely put an age limit on it and try to keep them away from it as much as possible. I always loved being able to play in my yard with my animals, and my dog, and my friends. It’s going to be interesting to see what the world is like when I do have kids.

Jenner recently aroused suspicion that she was expecting when she posted a photo of herself to Instagram back in December, sporting a skin-tight polka dot dress. Commenters on her post, as well as on Twitter, began asking if she was pregnant. Jenner, however, was quick to shut down the budding rumors and body-shamers alike with a response that can only be described as epic. She responded to an article on Twitter asking if she was pregnant by saying, "I just like bagels ok!!!" Girl, YAAAS.

Along with her amazing bagel comment, she also posted a photo of her car to Instagram with the caption, "MY BABY." I think it's clear that Jenner has no time for petty rumors or comments on her body.

She has made something of a name for herself recently when it comes to body positivity. At the 2018 Golden Globes, Jenner was photographed wearing another fabulous dress, this time a tulle number by Giambattista Valli. But, once again, her photos were put under a microscope and people felt the need to comment on her skin — specifically a small breakout on her face. Fortunately, it was a more positive tweet that really took off.

One user wrote "Ok but @KendallJenner showing up and strutting her acne while looking like a gorgeous star is what every girl needs to understand." The powerful tweet even caught Jenner's eye and she responded with, "never let that sh*t stop you! 😎✨"

Her killer responses to criticism doesn't mean that all of the scrutiny doesn't get to her. “I have such debilitating anxiety because of everything going on that I literally wake up in the middle of the night with full-on panic attacks,” she said in her Harper's Bazaar interview.

Jenner's dedication to remain true to herself is pretty inspiring. She seems to be wholly focused on her blossoming modeling career, and starting a family is taking the back seat for the time being. Obviously, it is completely up to her if and when she takes that step and how she lives her life is her business. Keep doing you, Kendall.