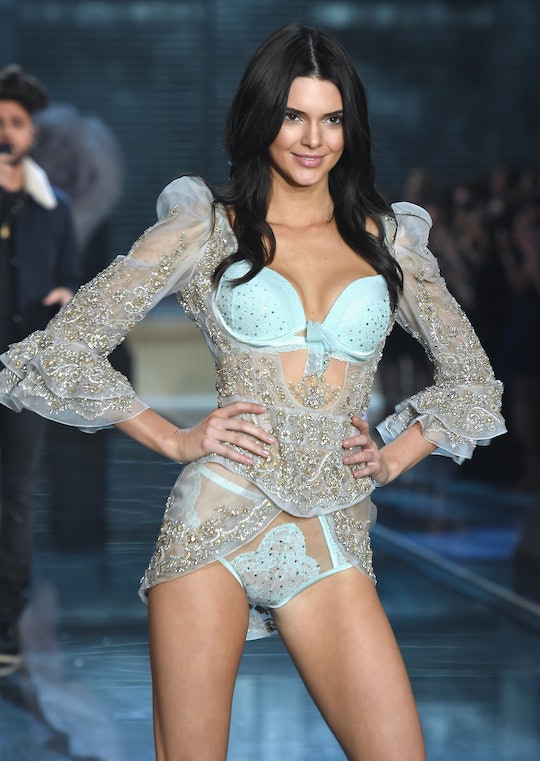 To our delight (or dismay, I can't decide which), "man buns" are everywhere. They've been rocked by everyone from hipster dudes on the streets of Williamsburg, Brooklyn to our favorite male celebs, walking the red carpet at award shows. So naturally was only a matter of time before we saw a lady sporting a man bun... right? Er, right. Following the Victoria's Secret Fall Fashion Show last week, Kendall Jenner reportedly asked to wear a "man bus" to the after party — and now we can officially say that the hairstyle is here to stay.

Whether she's jetsetting in a chic cape or fighting off the rain in a fur coat and metallic booties, this 20-year-old is known for taking risks when it comes to fashion. And that may be just another benefit to growing up under a fiercely stylish trio of sisters. (After all, if your big sisters are Kourtney, Kim, and Khloe Kardashian, how could you not turn out with a killer sense of style?) Though some of us will call what Kendall's sporting a half knot or simply a half-up bun, you have to admit that the 'do does draw some parallels to the coveted man bun. And man, does it look chic. Plus, Jenner proves the "man bun" isn't just for lazy Saturdays at a hipster coffee house. She rocked her own man bun in nothing but high style:

And while we're on the subject of man buns... here's further proof that the hairs style is taking over the world:

More Like This
Toe-tally Cute Summer Pedicure Ideas
Is Salicylic Acid Safe To Use On Skin During Pregnancy?
Why It's Crucial to Get Good Sleep As A New Mom — Plus, Tips On How To Do It
Bright & Festive Nails To Rock On July 4th