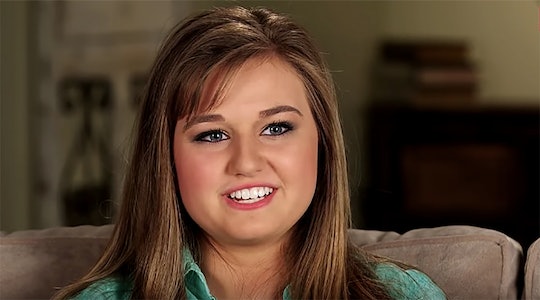 Kendra Duggar Gives Birth To Baby No. 2 & Her Little Girl's Name Is Gorgeous

Another girl has joined the Duggar family! Kendra Duggar gave birth to her second child with Joseph Duggar on Nov. 2, and the whole family seems to be doing just fine. The new addition joins little brother Garrett David who was born June 18, 2018, officially making Caldwell a mom of two under two.

At the time of this writing, the thrilled parents have yet to share a pic of their newborn to their personal Instagram page, but they did reveal key details about their new bundle of joy. The baby (who came in at 7 pounds and 12.5 ounces, measuring 20.5 inches long) arrived at 5:33 a.m. on Saturday and it was a quick delivery, as the two noted to Us Weekly on Monday. As for the new baby's name? Welcome to the world, Addison Renee!

“Addison Renee has made us a family of four and we are already so in love with her!” the couple told Us Weekly. “She made a quick arrival in the early hours of the morning and has already melted our hearts. We know Garrett is going to be a great big brother. Children are each a special gift from God and we are so happy our newest blessing is here.”

Switching gears a bit, the happy parents-of-two experienced a whirlwind courtship and it hasn't calmed down since. Duggar, the seventh oldest child and third eldest son of Jim Bob and Michelle, courted, proposed to, and married Caldwell all in the same year, according to the couple's official website. Three months later, they announced they were expecting, and baby boy Garrett David was born in June 18, 2018.

Then in April, the two announced their second pregnancy and in June they revealed that they were having a a baby girl, according to People.

Little Garrett even had a part in the gender reveal, as the frosting inside his first birthday smash cake was pink. "We are so excited to announce that the gender of our baby number 2 is a girl!" the couple announced on Instagram. "We are so thrilled to welcome our sweet baby girl this November."

As luck would have it, Joseph's brother Josiah Duggar announced that his wife, Lauren, is also expecting a baby girl.

In terms of the actual pregnancy reveal, Caldwell broke the news to her hubby in a very original way. Duggar is known for licking his bowls clean after every dinner (yes, you read that right) so Caldwell took advantage of this and wrote "baby soon" at the bottom of his dinner plate. Once he had finished, he saw the good news and was floored!

“Being parents has already proven to be a greater joy than we had hoped or imagined. We love getting to parent together and are loving every moment and milestone," Caldwell told Us Weekly at the time. "We are very happy that our little family will welcome a new addition later this year. Children really are a blessing from God!”

Caldwell also admitted the pregnancy was a bit of a surprise, stating, according to The Ashley's Reality Roundup: "When I found out I was expecting, I was at first really shocked, and then I was super excited, and then I just couldn't believe it was really happening. And then I was just really excited again. There was just so many emotions; we are so thrilled."

It's clear that Duggar and Caldwell are proud as can be of their new family. Here's to hoping we get to see more of baby Addison and her brother Garrett on social media because two under two definitely makes for some great (and cute) photo ops. Congrats again to the happy family!

More Like This
Here's The Best Time To Remove Your C-Section Tape
Can The Way You Sleep Really Turn A Breech Baby?
A C-Section Actually Doesn't Take As Long As You Think, According To Experts
13 Creative & Cute Mother’s Day Baby Announcement Ideas