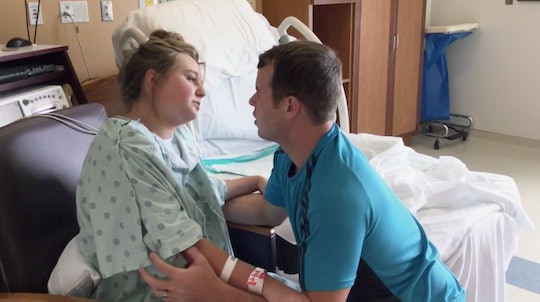 Another day, another Duggar baby to celebrate. After months of anticipation, Joe and Kendra Duggar officially welcomed their first son, Garrett David Duggar, into the world on June 8. Though the baby was born weeks ago, TLC has announced that the labor and delivery were filmed for an episode called "Joe & Kendra's First Baby," and the special is already available to view online. And what was revealed about Kendra Duggar's birth story during the special is both emotional and raw.

The segment opens with Kendra's mom, Christina Caldwell, coaching her daughter through the beginning moments of labor. Soon afterwards, the audience finds out that Christina is also expecting another child, as In Touch Weekly already reported. "We found out that my mom was expecting about a month ago," Kendra says. "I think this has definitely been really interesting, because we’ve been able to share a lot of things that we didn’t get to share before, so I feel like we’ve become even more like friends. I guess our relationship has just gone to a different level, I guess.”

Together, they practice counting the timing between contractions, and working on deep breathing practices for the delivery.

Kendra's mom also expresses her concern that she might stop breathing and pass out while in labor, as she tends to hold her breath when she's in pain. Parents reported that it's actually not uncommon to pass out during childbirth, which is why it's so important to practice breathing exercises as well as to stay in a safe position throughout labor, both of which Kendra did.

The first part concludes with Joe and Kendra heading to the hospital, while Kendra's contractions near less than two minutes apart on the ride over. Jessa then says that while she feels her brother is very calm under pressure, she isn't sure how he'll react to seeing his spouse going through so much pain. Joe's sister Joy-Anna, who E! News reported just gave birth to her first child this past February, adds:

I think going through labor is one of those things where you just have to experience it, because I had heard so much about it, I had watched birthing videos... but until I went through it, I didn't understand fully what women actually go through when they have a child.

The next part of the special shows exactly what happened from the time Kendra arrived at the hospital to when she gave birth almost 10 hours later. Part two opens with Jessa telling the camera that at 2:30 a.m., Joe texted his siblings to let them know that Kendra's contractions had picked up, and that they would be heading over to the hospital.

As Kendra labored for the next few hours in her hospital room, Joe coached her, and was super attentive and supportive. Eventually, it was time to deliver, and after a few long pushes with the help of an oxygen mask to help with breathing, baby Garrett was born.

The episode concluded on a super sweet note, with Joe's siblings offering their best new parenting advice. "For Joe and Kendra, I would say, help each other out as much as you can, especially Joe, because having a baby is not easy," Joy-Anna added. "Prepare to have sleep patterns rocked. Every schedule, every pattern of baby life is going to change, and it's OK, you just have to adjust and figure out the new normal," Ben Seewald, Jessa's husband added.

"No matter how many times we’ve experienced the joy of babies born in our families, there’s nothing comparable to the joy in our hearts today!" Joe and Kendra said in a statement to TLC, according to E! News. "Children truly are a gift from God. We are so thankful for his safe arrival and this new journey as parents."

The segment concluded with the new parents and Joe's mom, Michelle Duggar, accompanying them on their first ride home with their new son. As they expressed their excitement, worries and relief that their baby was born healthy, it was a reminder for everyone that life with their newborn has really only begun.