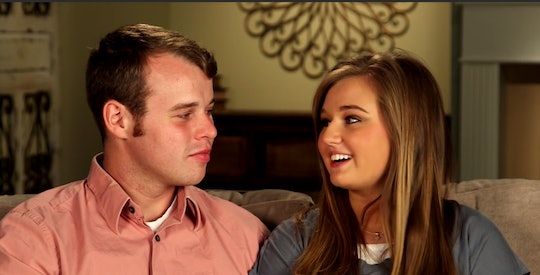 If you happen to be a fan of TLC's Counting On, then you're likely still reeling from the excitement of the recent news That's because Joe and Kendra Duggar announced they're expecting baby number two. Which means, yep — there's going to be yet another member of the Duggar family. Now that another little one is on the way, fans are probably busy reminiscing about Joe and Kendra's whirlwind relationship. And Kendra Duggar's quotes about Joseph prove he's truly a romantic at heart.

Joseph and Kendra first starting courting in March 2017, according to In Touch Weekly. And the way he went about asking her was actually extremely sweet. Since Joseph sells cars and Kendra's father is a pastor/mechanic, he decided to take her to a car auction as a decoy — so Kendra wouldn't suspect something important was about to happen. After that, they headed over to Joe's childhood home, where he surprised Kendra by officially asking her to take things to the next level. "I thought it was really special the way he asked me to court him, just seeing the place where he was born and had grown up," Kendra said on an episode of Counting On. "I had actually really been wanting to see that place. And he had told me he was going to show me at some point."

At the time, Kendra expressed her excitement to People. “I’m looking forward to getting to spend more time with Joseph as we take this exciting step toward a new season in life,” the then 18-year-old told the publication. “It’s a really wonderful moment!”

Judging by a TLC clip — during which Joe and Kendra revealed their favorite things — Joseph's eyes really are the windows to his soul. "My favorite color is your eye color," she said to her significant other. She later added, "I think I just love his personality and just spending time with him. I love his blue eyes and dimples".

Joe's romantic side was also apparent by the way he proposed to Kendra — at his sister, Joy-Anna's wedding to Austin Forsyth on May 26, 2017. As it turns out, he's a pro at pulling off the ultimate surprise. “I’m so happy and so shocked. There’s so many words I want to say, but just shocked. I had absolutely no idea,” Kendra told People. “He had the ring in his pocket so when I went to go help myself and grab mints out of his pocket, he grabbed at his pocket and I pulled my hand away. But then I quickly forgot about it.”

Joe and Kendra tied the knot on Sept 8, 2017, according to Us Weekly. Immediately following their wedding, the newlyweds reflected on their big day. "I think when we said, 'I do,' and said our vows and everything, I think it really was a super sweet time ... It was really amazing," Kendra said. "I think what I'm looking forward to most about the rest of our life is just living together and not having to say goodbye." Awww!

By December 2017, Joe and Kendra announced they were expecting their first child. "I hope the baby will be patient like Joe," Kendra shared. They welcomed a baby boy named Garrett David Duggar the following June.

And on April 11, they revealed they're currently expecting baby number two. "We are ready to double the fun at our house!" the couple wrote on their family's website. "Being parents has already proven to be a greater joy than we had hoped or imagined," Joe and Kendra wrote. "We love getting to parent together and are loving every moment and milestone. We are very happy that our little family will welcome a new addition later this year. Children really are a blessing from God!"

And there you have it. You might not have guessed it based on his rugged exterior, but according to wife, Kendra, Joesph Duggar is actually quite the romantic. And from the looks of it, he's a pretty awesome daddy, too. Congrats again, guys!