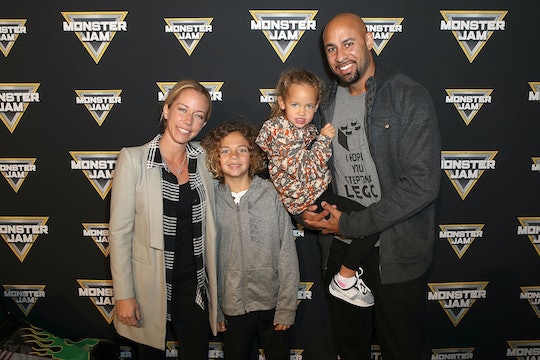 If there’s one celebrity who speaks her mind, it’s Kendra Wilkinson. The glamour model and TV star has never been afraid to say exactly what she thinks to anyone, so it’s no surprise that she isn’t afraid to take on internet commentators, who can be just about the meanest sometimes. But she’ll have none of that, and Kendra Wilkinson shut down mom-shamers in an epic rant on Instagram today which has so far received more than 96,000 likes.

No doubt it’s been a tough week for the mother of two; just a few days ago she announced on Instagram that she’s splitting from her husband of eight years, Philadelphia Eagles wide-receiver Hank Baskett. The same night she posted an image on her Instagram stories in which she’s taking a drink out of a shot glass while wearing a gaming headset, as reported by E! News. She used the hashtag #fortnite, presumably referring to the video game, and captioned it "Lol drunk bunny gamer".

Yesterday, E! News reported, she took time out for lunch with Jersey Shore stars Snooki and Deena Cortese, and later in the day was seen at an event in Calabasas with Tori Spelling, Jessica Hall, Erin Ziering, Beverley Mitchell, and Kimberly Caldwell. She Instagrammed both events with a caption about how friends and laughter are just what she needs right now.

You'd think people would know better than to kick anyone, even a celebrity, with they're already down. But this is the internet, so while Wilkinson did receive a lot of positive feedback she also received some nasty messages.

"Why are you acting like You are the victim? You have always put urself 1st in your marriage to [Hank Baskett] He’s been raising the Kids while Your off being Kendra and having Fun and acting like a Single Woman. Seriously, your reality show you could see your marriage falling apart. Everything is ALWAYS about You. SMH!!!" one person commented.

Another wrote, "U R an idiot to give up your husband! He was better to U than U were ever to him! How U going to run around drinking & dancing when Hanks not there to care for the kids & everything else??? Grow up, U r not 21 anymore! Shame on U."

"I’m sorry to c u hanging out with these types of party people. Never forget u r a mother first and a player second. Now I c why you left Hank," another commenter quipped.

"We all go through trials and tribulations but we don’t hang them on social media for people to feel sorry us, we pray and trust God and face our problems head on trusting God you must be a prayerful woman and learn to tell God your issues, Hank is good man I pray that must bless him with a prayer woman the next time he thinks about getting married," advised another armchair therapist.

Today Wilkinson clapped back, posting a long tirade on Instagram about feeling judged. She ended with the note that while she knows she shouldn't care, she's only human. No doubt girl!

I bust my *ss off as a human being. I work, pay bills, take care of 2 kids and love them to the fullest plus trying to take care of myself through it all is a 24/7 job. I don’t know what the f*ck some of u haters think u know but you better get your heads checked because your assumptions based on pictures and clips of shows make u straight up delusional. While people on the internet AND in real life are feeling bad for my kids cuz mama has to work, my kids at the same time are thanking me. I make my sacrifices so my kids can have a life they deserve. I drink to celebrate only and i enjoy my friends. One day I’ll get the credit i deserve for all the hard work i do but til then I’m going to keep doing me.

This kind of mom-shaming isn't limited to celebrities, though they may receive it more frequently from strangers than most of us do. Still, a poll reported by Psychology Today noted that a majority of American moms face mom-shaming, as much as 61 percent. While everything from diet to child safety seem to be up for debate, the poll found that discipline was the most-often critiqued among the moms surveyed.

Dr. Jillian Roberts, a child psychologist and associate professor of educational psychology at the University of Victoria told Global News that mom-shaming isn't as simple as just unsolicited advice. She explained that it's more of a two-edged sword, where someone's motivation and care about a child could be mixed in with a bad presentation. "People love children and they want the best for them, and it’s their preoccupation with the well-being of children that is the genesis of why they go to a judgy place,” she told Global News. She offered some advice for dealing with mom-shamers: use the sandwich technique where you put a hard response between two softer, more benign statements, according to Global News. Tell them you appreciate their concern, but you have it under control, and thank them for taking a moment to approach you.

Of course there's always the option to just take it to social media, like Wilkinson did, and tell off the haters. It seems to be working for her as she's received a slew of encouraging replies. Any of her true fan knows how resilient she is, and is surely hoping she'll be able to shake this off in her classic Kendra style and get back to laughing ASAP.