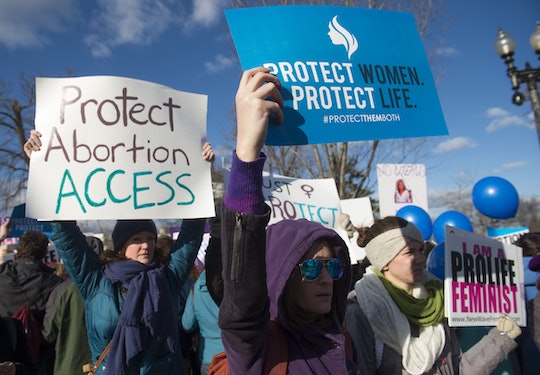 Kentucky Women Left With Only One Abortion Clinic

After a long legal battle with the state, one of Kentucky’s last two remaining abortion clinics will close down on Jan. 27. With only one abortion open provider left in the entire state, Kentucky women will surely face oppressive obstacles to find adequate reproductive health care and access to abortions, a very heavy and personal decision that can’t always be measured and decided by political and religious beliefs. The news of the closure came from the clinic itself — the executive director of EMW Women’s Clinic in Lexington announced in a Facebook post on Friday that the clinic “is now a permanent casualty of Kentucky's governor, Matt Bevin.”

“It is with extreme sadness and deep regret that I write to tell you (before you read it in the paper), that EMW WOMEN’S CLINIC, Lexington will close January 27th,” the clinic’s executive director said, according to a Facebook post from the Kentucky National Organization for Women’s account. The post continued:

As you know, for the past 6 1/2 months we have diligently pursued obtaining a license to operate an abortion facility. Although we and our attorney believed we had fulfilled all the requirements to obtain the license, the Inspector General of KY disagreed and denied us the license. Unfortunately, our landlord has also declined to renew our lease on the space we have occupied at 161 Burt Rd., since 1989.

As Donald Trump and his incoming administration make their way into the White House in a matter of days, the topic of abortion has been a heated debate — especially in Kentucky where abortion laws are strict.

Just last week, for instance, Kentucky lawmakers passed a bill which bans abortions after 20 weeks and has no exceptions for cases of rape or incest, only allowing abortions after the threshold if the mother's life is in danger. It also includes an ultrasound law that requires doctors "to display images from the ultrasound and narrate the process" to women seeking an abortion, according to The Hill.

“The law is an example of political interference operating in its most perverse form,” Alexa Kolbi-Molinas, senior staff attorney at the American Civil Liberties Union's Reproductive Freedom Project, said in a statement on Jan. 9, according to BuzzFeed. “A woman deserves to expect high quality compassionate care from her doctor. Instead, this law puts politicians in the exam room — squarely between a woman and her doctor.”

By the end of the month, only one women's clinic in Louisville will be able to provide abortions in the state, which is more than an hour away from the closed facility.

With daunting laws looming over women's choices in Kentucky, as pointed out by Raw Story, Kentucky women can also travel to nearby Cincinnati, Ohio, which is also about an hour an half away from Lexington, and see a medical professional at a Planned Parenthood location there.

"There is, indeed, a chill wind blowing for the women of KY," the EMW executive director ended the Facebook post, providing a glimpse of what could indeed be a very scary next four years for American women.

More Like This
What Is Monkeypox & Should You Be Worried? Here’s What You Need To Know
Two Young Children Have Been Hospitalized Because Their Formula Is Out Of Stock
Spain Could Offer Up To 5 Days Of Menstrual Leave A Month & It'd Be A Game Changer
Sen. Chris Murphy Begged Lawmakers To Act After Texas School Shooting Leaves 21 Dead