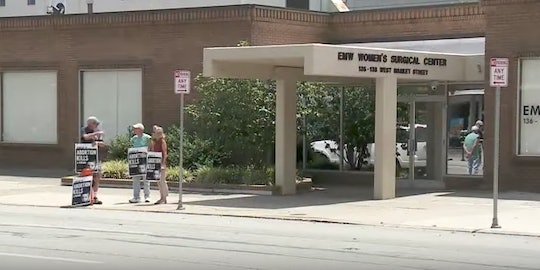 A single abortion clinic stands today in Kentucky — but that number could very well reach zero. Founded in 1981, the EMW Women's Surgical Center in Louisville is the only place where women can go in the entire state to terminate a pregnancy. That could soon change, however, as the state is threatening to shut it down due to a new stipulation in its licensing paperwork. Which brings us to this startling reality: Kentucky could be the first state with no abortion clinics. And that will only serve to compromise the health of even more women in the state.

It all began in March, when Gov. Matt Bevin's administration informed the clinic that its transfer agreement had been declared insufficient, according to NBC News. Transfer agreements are between an abortion clinic and a hospital — it's an agreement that the hospital will accept the clinic's patients in the event of an emergency, according to CNN. Previously, the head of a hospital's obstetrics/gynecology department was the one who signed the EMW Louisville clinic's transfer agreement. Now, the state has suddenly said this signature isn't good enough; the hospital president or CEO must sign instead. Except, no CEO or president at any local hospital has agreed to do so.

Clearly, this out-of-the-blue change in transfer agreement requirements is an thinly-veiled attempt by the current administration to wipe out abortion services in Kentucky, which seem to qualify as TRAP laws, or targeted regulation of abortion providers. "The standards are just outrageous," Dona Wells, who co-founded the EMW Louisville clinic, told CNN. Wells and others who are against the state law point out it's unnecessary because emergency rooms are already required by federal law to accept any person who arrives — regardless of a transfer agreement. A federal district judge is now considering if the state's requirements are constitutional. Ultimately, this decision could very well reach the Supreme Court, which could in turn have lasting ramifications for women across the nation.

Spokesman for the Kentucky Cabinet for Health and Family Services, Doug Hogan, insists the new regulations are about women's health and safety (a claim that those who propose TRAP laws often make and one that was rejected by the Supreme Court). "The Bevin Administration is working diligently to protect the health, welfare and lives of women in Kentucky," Hogan said in a written statement, according to CNN. He continued:

The statutory requirement for transfer agreements —which was enacted in 1998 and not questioned for 19 years — is necessary to ensure women have access to life-saving procedures in the event of an emergency.

But, the transfer agreements were A-OK and sufficiently protected women's health for all of these years until now, so what's different?

If you're sitting there reading this and feeling utterly powerless, there are ways to make a difference. Here are just a few actions you can take to help support the EMW Women's Surgical Center in Louisville, and abortion clinics in general.

Vote For Representatives Who Support The Right To Choose

No matter where you live, make it a point to support representatives who are dedicated to voting for measures that would protect a woman's right to choose.

Volunteer To Be A Clinic Escort

If you live in the area, you can help safely escort women seeking abortions into the clinic — past a barrage of pro-life protestors who have attempted to physically block the entrance of the last abortion clinic in Kentucky.

For the continued safety and well-being of women in Kentucky — and across the U.S. — it is imperative that we continue to have access to abortion clinics. Not having access to safe, legal abortion actually increases the number of abortions and the chance that women die from them. Closing clinics doesn't improve women's health — it's an attempt to control women under the religious guise of protecting unborn fetuses.

More Like This
New York Can End Religious Exemptions to Vaccine Mandates, Says A Federal Appeals Court
Scotland Becomes First Country To Make Pads & Tampons Free For Anyone Who Needs Them
DeSantis Calls Teacher Requirements "Too Rigid" As Florida Looks To Veterans To Teach
Nebraska Authorities Used Teen’s Facebook DMs To Charge Her & Her Mom In An Abortion Case