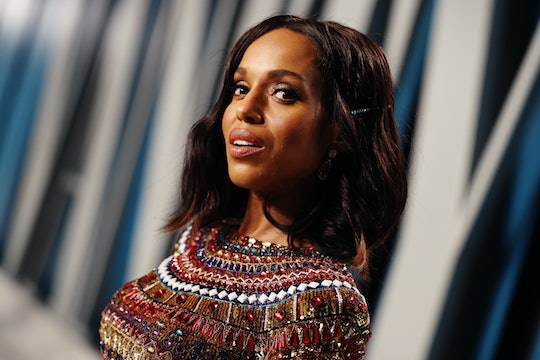 In a recent virtual interview on Jimmy Kimmel Live!, Kerry Washington opened up about how recent protests in defense of Black lives got her thinking about education. Specifically, the Little Fires Everywhere star began reflecting on the limited ways in which children tend to be introduced to Black history. Instead of beginning with slavery and the Civil Rights Movement, Washington said she hopes children learn about Black history differently and, ultimately, gain a deeper understanding of Black people's rich and varied history.

"I've been thinking a lot about education and a lot about talking about race and introducing ideas of race [to children]," Washington told Jimmy Kimmel Tuesday. "Kids are introduced to race at Black History Month or in the concept of change makers like Martin Luther King Jr. or Rosa Parks and I think it's really important that we start to introduce the idea of race with a Black history that begins before teaching kids about what Black people were told they couldn't do."

While Washington has two biological children — 6-year-old Isabelle and 3-year-old Caleb — with husband Nnamdi Asomugha, she has been vocal about the fact that she counts her 14-year-old stepdaughter as one of her kids, making her a mom of three.

After citing Alicia Keys' recent memoir More Myself for inspiring some of her thoughts about how Black history should be taught to kids, Washington noted there was more to the history of Black people and Black cultures than slavery and segregation.

"It's this idea that teaching kids that Black history and Black people were a lot of things before segregation and Jim Crow and the Civil Rights Movement so that we understand the beautiful complexity and elegance and richness of Black history before refusing to be put in the back of the bus," she told Kimmel. "There's Masai Warriors, and the kingdoms of Ghana, and Queen Nefertiti, and the pyramids of Egypt."

Earlier in the interview, Washington said she wasn't surprised to see how many people were marching and protesting across the country for police accountability, Black Lives Matter, and an end to systemic racism. "It fills me with so much hope and encouragement," she said of recent protests. "I feel like we as a nation — and as a world in some ways — we're just done having our governments work in ways that don't reflect our values."

The actor went on to say she felt that many people were waking up to the fact that you cannot be a bystander or passive participant in a democracy but must instead show up. "Democracy works if we all show up and we all express our values whether it's voting or in the streets protesting," Washington said. "That is what democracy looks like."

When asked if her children were aware of what was going on and what she and Asomugha were telling them about recent events, Washington noted that most Black families didn't have the privilege of not knowing what was happening. "There's a lot of posts [saying] privilege looks like discovering that racism exists as opposed to knowing that it exists," she explained. "So, I think for a lot of Black families, we don't have the privilege of ignoring what's going on and pretending that it's not happening."