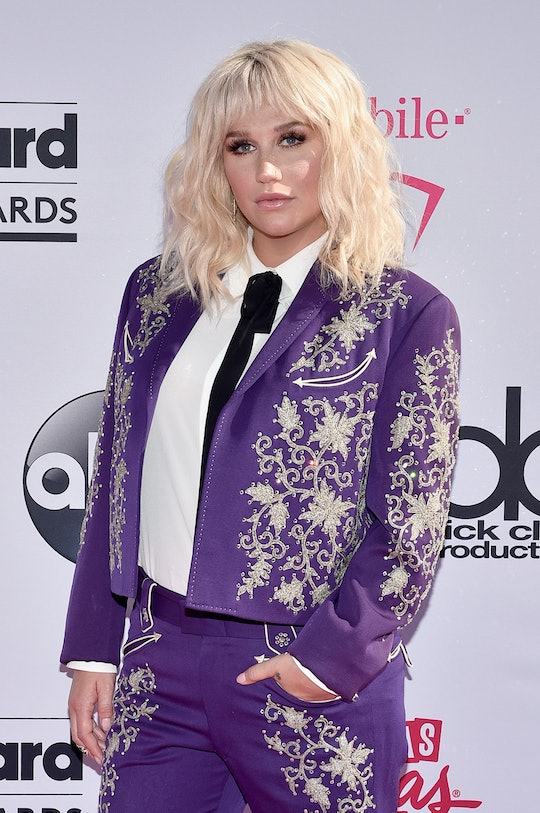 The weeks leading up to the Billboard Music Awards were not easy for Kesha, but that didn't stop her from packing serious star power upon arrival. Kesha arrived at the Billboard Music Awards dressed in purple. Her bold outfit seemed to be inspired by the suits worn by matadors, Daily Mail reported. Though the look didn't get a universally-positive reaction on Twitter, Kesha's fans still praised the singer for staying strong during the controversy leading up to her performance.

After her arrival at the BBMAs, Kesha Instagrammed two photos of her magenta carpet look and described her fashion inspiration in the caption:

very lucky to be wearing a classic nudie suit on this carpet. this piece of vintage clothing is truly a piece of art ( like. museum piece ) and an homage to both Bob Dylan and Prince. thank u so so much to the nudie suit crew for sharing this art and letting it adorn my body tonight. I'm very appreciative and grateful

The BBMAs mark Kesha's first performance since her court case against her record label was closed in February. According to Billboard, Kesha's Bob Dylan tribute is scheduled to go on as planned. Earlier this week, Billboard reported that Kemosabe Records said Kesha wouldn't be permitted to perform in light of her legal battle with Dr. Luke. It wasn't until Thursday that Kemosabe Records gave the go-ahead, assured by Kesha that she wouldn't reference the case on camera. When the record label signed off on Kesha's BBMA performance, the singer celebrated the announcement Friday, tweeting, "good work animals. looks like our voices can be heard after all." Kesha is expected to cover "It Ain't Me, Babe," originally performed by Bob Dylan.

Kemosabe Records claimed that they initially approved Kesha singing at the BBMAs, The New York Times reported. A statement from the company read:

Kesha’s performance on the Billboard Music Awards was always approved, in good faith. Approval was only suspended when Kemosabe learned Kesha was to use the performance as a platform to discuss the litigation. Now that Kemosabe has obtained assurances, that it is relying upon, from Kesha, her representatives and Dick Clark Productions that neither Kesha nor her supporters will use the performance as such a platform, the approval has been restored.

Kesha's arrival at the BBMAs sparked lots of excited commentary from supporters on Twitter:

The singer has had a seriously challenging start to 2016. According to Rolling Stone, Kesha sued Dr. Luke in 2014, accusing the producer of physical, verbal, and emotional abuse. Dr. Luke filed a countersuit, but the case stalled until this year. In February, Kesha was denied an injunction that would have allowed her to record music without relying on Sony Music. The decision prompted outrage: if Kesha wanted to continue her career, she'd be forced to work with the label embroiled in the lawsuit. The situation prompted the hashtag #FreeKesha to go viral and launched an international conversation. Kesha's performance at the BBMAs gives her the chance to step back into the spotlight and resume her life as an artist.

Kesha joins a seriously incredible lineup of 2016 BBMA performers; according to Billboard, that includes Justin Bieber, Shawn Mendes, Fifth Harmony with Ty Dolla Sign, Troye Sivan, Meghan Trainor, Blake Shelton and Gwen Stefani, Nick Jonas featuring Tove Lo, Rihanna, and Demi Lovato. Viewers will also see a medley by Britney Spears, a Prince tribute by Madonna, a rendition of "The Show Must Go On" by Celine Dion, and the new single "Just Like Fire" by P!nk.

Kesha's fought hard to step into the spotlight tonight, and fans will definitely be cheering her on.