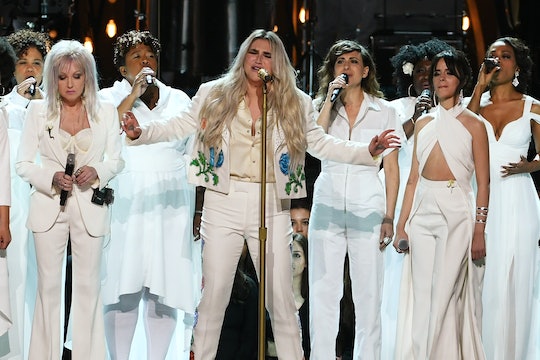 And you said that I was done. Well, you were wrong and now the best is yet to come. 'Cause I can make it on my own. And I don't need you, I found a strength I've never known.

I've said those words. Well, a less-articulate, less-beautiful variation of those words. With hard eyes and an ache in the ribs, I've stared at my abuser and shared my pain with anguished declarations of healing and triumph. Except, I wasn't actually looking at the man who raped me at a work retreat almost six years ago. I was staring at the wall in my bathroom as I took a shower. I have closed my eyes at night at imagined a random run-in in which I walk away not only unscathed, but powerful and validated. In this fantasy, my abuser is disheveled, emasculated, and scared, while I stand emboldened, much like Kesha stood on the 60th annual Grammys stage, singing her heartbreaking and inspiring ballad "Praying."

There is no 'ultimate healing' from sexual assault. There is no end point, in which the past will no longer be a lingering memory or an insidious nightmare.

Dressed in white, and accompanied by Cyndi Lauper, Camila Cabello, Julia Michaels, Andra Day, Bebe Rexha, and the Resistance Revival Chorus, Kesha embodied my desire for a classy revenge. To stand in front of a world that is constantly asking survivors "How much did you have to drink?" and "What were you wearing?" and "But, you knew him, right?" and sing was an act of superhuman strength many "victims" can only dream of. In that moment, Kesha wasn't just Kesha: she was every survivor who suffered, told her story, was doubted and attacked and dismissed, but persevered anyway. For the millions of fans familiar with her story, she was selling the narrative of catharsis through performance. Through rainbow face paint and pristine white suits and gleaming backdrops.

But it was Kesha's breakdown at the end of her performance, in which she hugged the women around her and clearly began to cry, that brought me back to reality. There is no "ultimate healing" from sexual assault. There is no end point, in which the past will no longer be a lingering memory or an insidious nightmare or the symptoms of post traumatic stress disorder (PTSD). The idea that a victim of sexual assault will eventually "get over it" is as factual, and dangerous, as the idea that we are somehow to blame for the abuse we've endured.

So it was Kesha's defiant, yet raw and painfully honest, performance that brought the dark side of the #MeToo movement to light: sharing our stories, however necessary and however brave and however vital to the hopeful eradication of sexual violence against women and a rape culture that enables it, will not automatically heal us.

As a victim of sexual assault, I've grappled with the idea of being "healed." Will I ever, truly, rid myself of the night a coworker thought himself entitled to my body? Will I spend a single day when I don't think about him, or, on particularly bad days, almost feel him behind me? Am I destined to, from time to time, remember the bruises on my breasts and thighs and wrists? The bruises he left behind? Will I be able to visit an emergency room or a hospital and not think about the rape kit I endured? Will I look at a pair of sweatpants and not miss the ones I was wearing the night I was raped? The ones that were bagged as evidence, placed in some backroom with other rape kits, collecting dust and indifference?

Sadly, I think the answer is no. No matter how many years separate me from my assault, or how many times I share my story in the hopes that more women will be believed and more men will be held accountable, there's nothing I can do to take back what someone else did to me. And that, in and of itself, is what makes sexual violence so treacherous. So vile. So inhumane and unthinkable and cruel and so many of the worst things humans are capable of doing.

According to the Rape, Abuse, & Incest National Network, it's common for survivors of sexual assault to experience depression, flashbacks, post-traumatic stress disorder, self-harm, substance abuse, disassociation, eating disorders, sleep disorders, and suicidal ideation. And according to the Us. Department of Veterans Affairs, "One study that examined PTSD symptoms among women who were raped found that almost all (94 out of 100) women experienced these symptoms during the two weeks immediately following the rape. Nine months later, about 30 out of 100 of the women were still reporting this pattern of symptoms. The National Women's Study reported that almost one of every three all rape victims develop PTSD sometime during their lives."

The effects of sexual assault stay with survivors long after any obvious physical injuries heal. My bruises faded, but night terrors and PTSD triggers and a seemingly never-ending eating disorder remain; a constant reminder that one night, six years ago, a man didn't consider me to be a human being. Like many survivors of sexual assault, I'm still trying to hold on as I ride a carousel of emotions spanning from shock and numbness to loss of control to fear to self-blame and guilt to isolation to vulnerability and distrust to insurmountable anger.

It's been six years.

The #MeToo movement has been successful at mobilizing victims to pursue justice, as we saw in the sentencing of USA Gymnastics national team doctor Larry Nassar, led by Rachel Denhollander — the first voice to speak out publicly against Nassar. But the idea that victims need to perform their trauma for the world to heal, to be avenged, is too simplistic.

There is no 'end date' to the aftermath of sexual abuse and trauma. There is no 'OK, I'm over it!' and there may never be a time when we, as survivors, can no longer remember what we've endured.

That's why Kesha's performance was so poignant and important. Yes, it was empowering and it was a call to action. In a Lenny Letter essay, Kesha wrote: “This song is about coming to feel empathy for someone else even if they hurt you or scare you. It's a song about learning to be proud of the person you are even during low moments when you feel alone. It's also about hoping everyone, even someone who hurt you, can heal."

But her performance, particularly the end when her voice breaks and tears fall down her cheeks and she leans on the women around her, is a reminder that healing is ongoing. There is no "end date" to the aftermath of sexual abuse and trauma. There is no "OK, I'm over it!" and there may never be a time when we, as survivors, can no longer remember what we've endured.