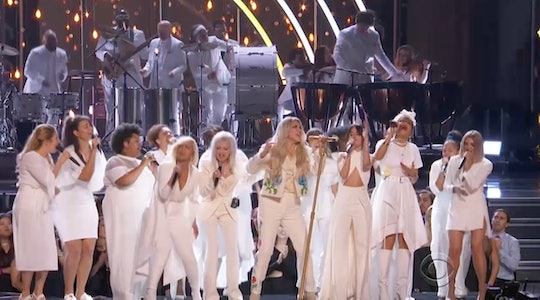 Music speaks louder than words. Sometimes, when you can't find the right words to fit, music can fill those gaps and give people a voice, even when they can not speak up for themselves. A lot of that was made clear during what some call "the biggest night in music" on Sunday night. And Kesha's performance at the 2018 Grammy Awards is a stand-out example, moving from the first quavering notes of Kesha's voice to a rousing chorus of women.

Me too. Those two words shook up a nation in mid October, allowing your friends, family members, and celebrity idols to come forward and speak their own truth about sexual harassment and sexual assault. During the performance of her song "Praying," Kesha paid tribute to those two powerful words in the most touching way.

With such a strong chorus of women behind her, dressed in white, as a neon rainbow arched over head, you could feel the strength in Kesha's words. It was so incredibly powerful for Kesha, along with other incredibly strong performers like music legend Cyndi Lauper, "Havana" singer Camila Cabello, songwriting powerhouse Julia Michaels, Bebe Rexha, and Andra Day to come forward and devote her performance to the women of #MeToo. When the words were not able to come to mind, Kesha's performance spoke volumes. Survivors of sexual assault and abuse are not alone. Fans heard this message loud and clear, taking to Twitter to share their thoughts about the stirring performance.

While it might have dropped a heavier tone over the crowd (who were ready for it) and surprised a lot of viewers at home, Kesha fans knew what to expect. Just one day before the Grammys, Kesha took to Twitter to talk about "Praying" and give fans a glimpse of what was to come at the awards show. Kesha wrote on Twitter:

When I wrote "Praying" with Ben Abraham and Ryan Lewis, I felt as if I had just gotten a huge weight off of my shoulders. It felt like an emotional raw victory for myself, one step closer to healing. I never could have known what would've happened these past few years. I just want to say that I needed this song in a very real way, I'm so proud and nervous and overwhelmed to be performing it at the Grammys on Sunday, and if you need it I hope this song finds you.

The New York Times also reported, ahead of Kesha's performance, that she would be performing with those special guests during a #MeToo moment at the show. And while their appearances might have not come as a surprise, no one expected just how amazing their performance would be when all of their voices came together.

If Kesha was nervous about her performance, the strength of other women likely propelled her along, because she killed it onstage. Even without her performance, as Kesha stated, the song "Praying" can bring comfort to those who need it the most. Kesha told Genius that the song was about her "finding peace" in the fact that she "can't control everything." When the song debuted this past July, Kesha wrote about the song's importance to her on Lenny Letter:

"This song is about coming to feel empathy for someone else even if they hurt you or scare you. It's a song about learning to be proud of the person you are even during low moments when you feel alone. It's also about hoping everyone, even someone who hurt you, can heal."

You can tell that the song's message resonated not only with Kesha but her fans, too — because it got her a nomination at the 2018 Grammy Awards for Best Pop Solo Performance and her album, Rainbow, received a nomination for Best Pop Vocal Album. If her performance at the 2018 Grammy Awards didn't convince you already, this gives even more proof that Kesha knows how to turn hardship into transcendent art.