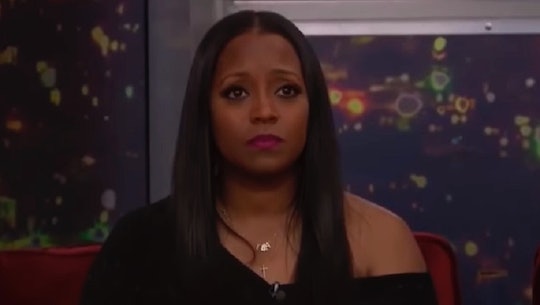 Pulling the mom card can be totally valid, especially when it comes to your baby's health. So, as Parade reported, the fact that Keshia Knight Pulliam left Celebrity Big Brother in order breastfeed her daughter is a completely understandable reason — one that nursing mothers can certainly resonate with.

Pulliam, who is best known as Rudy from The Cosby Show, has shown that she is a strong competitor on Celebrity Big Brother, but last night, she let her walls down and showed her vulnerable side. On last night's episode of the show, she and fellow contestant Omarosa Manigault were up for elimination. Then, when Marissa Jaret Winokur won the Power of Veto, she was given the option to replace either Manigault or Pulliam with another player. Winokur, along with several others, decided to save Pulliam and to backdoor actress Shannon Elizabeth instead, according to E! News.

Upon hearing this news, one would think that Pulliam would be so excited, but her reaction was breaking down in tears. Pulliam pleaded with her fellow competitors to keep her on the block and to vote her out of the Celebrity Big Brother house for a very important reason. Pulliam revealed that her breast milk had nearly dried up and she needed to get home to feed her daughter, 1-year-old Ella Grace Hartwell. Sympathetic to Pulliam's needs, the other contestants respected her wishes and she was sent home.

For any mother, breastfeeding can have its challenges, and according to Fit Pregnancy, some of the most common issues include not having enough time to pump, it can be painful, and some mothers have trouble producing enough milk, so Pulliam falls right into the struggles of an average, nursing mother.

After leaving the house, on the show, Pulliam told host Julie Chen that her daughter still primarily relies on breast milk for her nutrients. Pulliam, who is a single mother, told E! News that she continued to have difficulties increasing her milk supply while in the Celebrity Big Brother house. She explained:

My breast milk supply had been continuously going down and I had been doing everything that I could to try to get it to increase — from upping my water to, over the past few days, taking lactation aid, the natural teas, and all of these different things. And it just continued to deplete ... The final straw was the morning of eviction, at like 6:30, I got up to pump because I was just trying to pump, pump, pump because my breast milk just wasn't coming down the way that it normally did. My breast pump broke!

Pulliam was beyond frustrated and she told E! News that she took her pump breaking as a sign and decided it was time for her to return home to her little one. In an interview with the Toronto Sun, Pulliam said that her family was more important than playing a game on television, explaining:

I feel breastfeeding is important and something we (parents) chose to do ... I was pumping every day and breast milk was being delivered to her daily. But I couldn’t anticipate how much the stress the show would have on my breast milk. I started CBB with six boxes full of milk. By the time I left, I was having trouble filling two. I definitely came to play and to win … but family comes first.

Pulliam has definitely shown that her baby girl is her first priority.

Being in the Celebrity Big Brother house, with constant scheming and backstabbing, is absolutely a stressful environment, so this could have played a part in Pulliam's issue with producing enough breast milk. According to Baby Center: Expert Advice, breastfeeding while under stress can definitely "slow the flow."

Last night, Pulliam posted a message on Instagram with a photo of herself holding her little girl. In the caption, Pulliam wrote:

Thank you all for your support & well wishes!! There is no amount of money ever worth sacrificing her needs. When you become a mother your entire world shifts. Everything I do is for this little girl. I am grateful for the #BigBrother opportunity. However, nothing tops this feeling right here. Tonight I won!!

She added, "My desire is always to be an example of #BlackGirlMagic because I have my little girl and millions of little girls around the word watching, learning & modeling my actions. This is BIGGER than me." She completed the post with the hashtags "#MommyAndEllaGrace," "#NormalizeBreastFeeding," and "#FamilyOverEverything."

Clearly, Pulliam has more peace of mind knowing that she can provide for her child first-hand. And, any mother can totally relate to Pulliam's decision to leave the show in order to be able to care for her daughter.