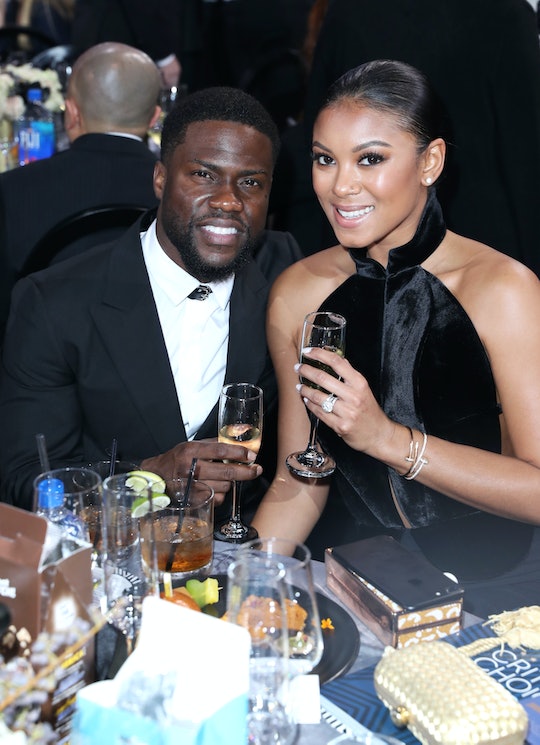 Kevin & Eniko Hart Welcome A Baby Boy, & The Announcement Is So Sweet

Congratulations are in order for one lucky Hollywood couple. Kevin Hart and wife Eniko welcomed baby boy Kenzo Kash Hart early Tuesday morning and it seems like they couldn't be happier. It's clear that after adding another *heart* to their blended family, there is a lot of love to go around in that home.

Hart and Eniko Hart — formerly Eniko Parrish — have been married for a little over a year. They held their elaborate wedding on Aug. 13. in Santa Barbara, California. Kenzo is their first child together, according to E! News. The baby boy is joining his two older siblings — 12-year-old sister Heaven and 10-year-old brother Hendrix — both of whom are from Hart's previous marriage to Torrei Hart. The comedian tweeted out the exact time of Kenzo's arrival, saying:

God is truly amazing....Kenzo Kash Hart was born at 1:45am ....He is Healthy & already smiling. Thank you all for your prayers!!!! We love & appreciate ya #Harts

Rumors of the pregnancy first began floating around in October 2016, but Hart was quick to dismiss the claims. He said, according to E! Online:

She's not pregnant. We're not expecting. When we do, we'll know and you'll probably hear from me several months after. You'll probably be able to tell because she'll be showing, but when that does happen I won't be public about it off the bat.

Though it wasn't long until he officially confirmed the news. The couple first announced the pregnancy on Mother's Day, sharing their exciting news as well as the sex of the baby: a boy. In a timely Instagram post, Hart shared a selfie of the two of them with the caption:

Celebrating Mother's Day with my beautiful wife. We are laughing at the fact that this time next year we will be celebrating her 1st actual Mother's Day. #Harts#Blessed

Their excitement was evident considering the lavish jungle-themed baby shower in October, which came with an estimated $118,000 price tag, according to BET. The Harts pulled out all the stops for the Lion King baby shower, which included two golden retrievers in some adorably convincing lion manes. It was at the party that they revealed their future baby's name with an ornately decorated table: Kenzo.

Thirty-three-year-old Eniko remained very active, both on social media and in the gym, for the entirety of her pregnancy. Along with numerous photos and videos of her growing belly, the then-mom-to-be shared videos of her third-trimester workout routines on Instagram, showing the power of the pregnant body. Despite the numerous health benefits of continuing to work out during your pregnancy if it was part of your previous routine, some commenters on Eniko's posts were concerned that she was overdoing it. One person wrote on her most recent post:

She really needs to sit down and let that baby do it's [sic] thing to come out but she so stressed out she can't relax and just take it easy. Goodness sake look at that stomach too much!

Others gave her props for her determination, with one saying: "Wow thumbs up to you, I couldn't work a full time job and work out did not have the strength or energy." But it looks like her workouts have come to an end, at least for the time being. She captioned the photo in question, "At 39 weeks I can honestly say my body still wants to train but I’m going to take it easy and walk it out during these last few days until labor."

Now that little Kenzo is out and about in the world, mama will be able to resume her workouts after a much needed period of rest and family time. No photos have been released of the little one, but privacy and respect are key no matter how famous the family is. Once they are ready, photos will likely be released. Until then, congratulations to the family.