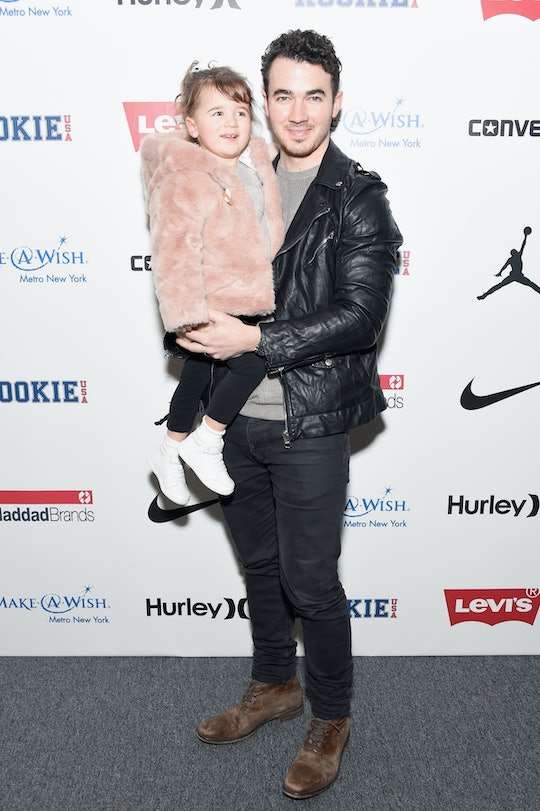 The iconic band the Jonas Brothers may be retired — but it looks like Kevin Jonas' daughter is prepared to carry on the legacy. Kevin Jonas posted a video of his daughter Alena's bedtime concert to Instagram, and it's clear that she takes after her dad and uncles. Just wait till you see those sweet moves!

"Just a little rehearsal before bed," Jonas captioned a video on Instagram on Tuesday. In the clip, which tragically does not have any sound, his daughter Alena, almost 5, stands behind a children's mic stand, singing and swinging her hips back and forth. She may be wearing pajamas and fuzzy slippers, but she looks totally ready to take the stage.

Next to Alena in the video is her younger sister Valentina, 2, who is sitting at a pink children's piano. Instead of playing the keys, she removes the little music stand portion of the piano and moves it around as if it were a steering wheel. I'm sure some piano accompaniment would have added a lot to Alena's ballad, but since there's no audio on the clip anyway, Valentina's moves totally work. Hopefully Jonas' mic is working next time Alena puts on a bedtime concert, because fans are ready to hear the Jonas Sisters in action.

This is not the first time the microphone made an appearance on Instagram. On Dec. 30, Jonas' wife Danielle Jonas, a jewelry designer, posted a video of some "after Christmas fun" on Instagram. In the clip, Jonas put his JoBros skills to use by crooning "The Wheels on the Bus" to Valentina, who helped him out by providing background vocals into what looks like a toy eggplant.

The microphone wasn't the only Christmas present Alena (apparently) received. On Christmas Day last month, Jonas posted a photo of Alena with a look on her face that can only mean one thing — she was screaming with joy after opening a gift from Santa. "Hope you got what you wanted this Christmas. Alena sure did," he captioned the photo.

Not to mention, performing in a band isn't Alena's only possible future career at the moment — she may also be considering modeling. In August, her dad Instagrammed an artsy photo of her posing on the beach, captioned "#modellife."

Even though it's clear that Jonas is an amazing dad, things weren't always so easy for him as a parent. In 2016, when Danielle was pregnant with Valentina, Jonas opened up in an interview for Oprah: Where Are They Now ― Extra about how he didn't connect with being a father as quickly as he was expecting, as the website For Every Mom noted. "Don’t be surprised if you don’t connect as a father right away. That’s the one thing… No one ever talked to me about it,” he said. "I didn’t find my place right away." Luckily, he did get the hang of things soon after. "I’m in such a good place with [Alena],” he added. "It’s amazing."