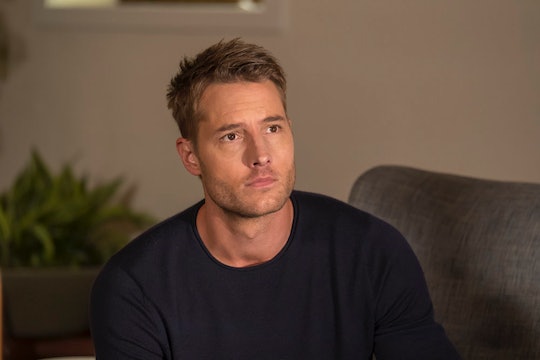 Kevin Opened Up To His Family On 'This Is Us'

The Pearson family has had a rough few months on This Is Us, and it all came to a head in "The Fifth Wheel" when Rebecca, Kate, Randall and their respective spouses went to visit Kevin in rehab. They weren't just there to check in on him, however. Kevin's family attended therapy together on This Is Us and it shed some light on his addiction, as well as how Jack's alcoholism impacted everyone. There were a lot of things they needed to discuss, and everyone involved was much better off after the talk — as tough as it was at times.

Kevin didn't only need to recover from the last few weeks; he had to get to the root of his issues. To do so, he had to explore his childhood and unpack his relationships with his family members, particularly his parents. Kevin felt that he had always been the fifth wheel amongst the Pearsons (hence the episode title) because Kate was so close to Jack and Randall was so close to Rebecca; there was nowhere for Kevin to fit in. As a result he developed a little voice in his head that repeatedly told him he wasn't good enough and he used various methods to drown it out (football, acting, fame, and finally alcohol and drugs) but none of it worked.

According to Kevin, it was only a matter of time before his addiction emerged because of his family history. Both Jack and Jack's father were addicts, and he thought Kate's issues with food could be considered another manifestation of addiction as well. That revelation led to Kevin's therapist Barbara asking Rebecca if she had ever discussed Jack's addiction with her children after his death, especially the possibility that they may have the gene for it as well. Rebecca hadn't, because she didn't want to color her children's already limited memories of their father. She wanted them to hold on to the good things, not the bad.

However, Jack's addiction was also a major part of who he was even if it was uncomfortable to talk about. Jack may have been a very different person from his cruel and violent father, but he was so kind in part as a reaction to the way he was raised. His father's alcoholism contributed to the person Jack became, just as his own addiction contributed to who his children became. "The Fifth Wheel" showed how addiction can potentially affect families over generations, causing a ripple effect that impacts every single person involved.

This was understandably difficult for the Pearsons to come to terms with. Kate and Randall both felt their parents were being attacked and that Kevin was exaggerating the extent to which he felt ignored by them. That is a feeling viewers of the show may share sometimes, too. Kevin did grow up in a comfortable home with countless opportunities and he went on to have an incredibly lucrative acting career. But you can struggle with your mental health no matter how well off you are, and each of the Big Three dealt with that in their own way: Randall with his anxiety, and Kevin and Kate with their own forms and levels of addiction.

The Pearsons needed to take an honest look at their past before they could move forward, and that meant doing so without the rose-colored glasses that Jack could often be viewed through. He was a good man and good father, but that didn't mean he was without flaws. Good people deal with addiction every day. This Is Us explored the reality of that while also showing how perceiving that as a contradiction could make it harder for the people around Jack to process it. They viewed his alcoholism as a fault (when, to be clear, addiction is a disease), so to reconcile it with the man they all loved, they tried to whitewash it. But that wasn't healing. That only made their issues come up over and over again.

To heal, they had to address the things they had avoided talking about for so long; only after that could they start to move on. Hopefully in the coming weeks, they'll do just that. But as this episode made clear, it's a journey that can take years. This is just the first step.