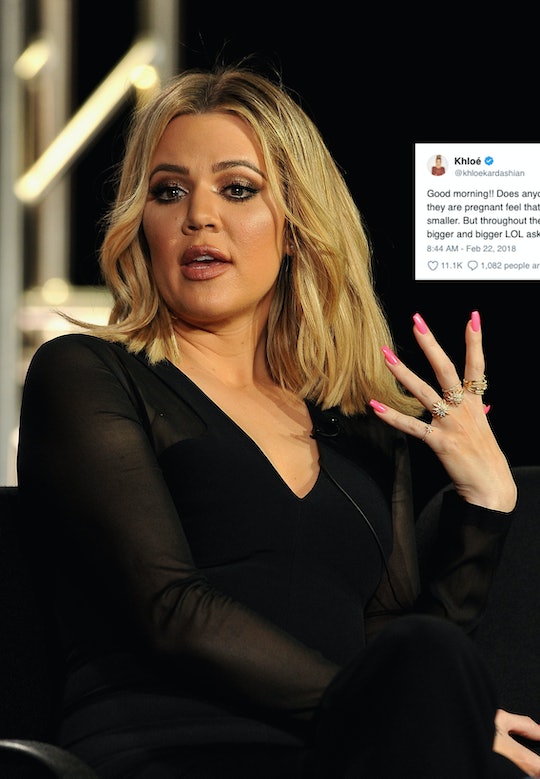 Like her younger sister Kylie Jenner, Khloé Kardashian managed to keep most of her pregnancy a sort-of secret. But unlike Jenner, Kardashian chose to publicly announce her pregnancy several months before the baby's due date. While there's no wrong way to go in terms of announcing (or not announcing), Kardashian's method does give her one advantage that her sister never had: the ability to ask her Twitter followers questions about pregnancy. And sure, Jenner had plenty of family members and friends who undoubtedly gave her great advice while she was expecting. But with more than 25 million followers, it's no surprise that Khloe Kardashian is asking Twitter about her bump.

"Good morning!! Does anyone else who has been pregnant or if they are pregnant feel that in the morning their bumps are smaller," Kardashian tweeted Thursday morning. "But throughout the day their bumper gets bigger and bigger and bigger LOL asking for a friend" She topped the tweet off with a facepalm emoji, and let me just say: Khloé, no facepalm emoji necessary! It's totally normal to have questions about your bump, and it's never wrong to ask them.

Unsurprisingly, hundreds quickly rushed to Kardashian's aid, responding to her tweet with words of comfort.

Just two minutes and a bunch of responses later, Kardashian was already feeling more at ease. "Great to know I’m not alone 🙏🏽🙏🏽🙏🏽," she tweeted.

One response that Kardashian seemed to be into came from Twitter user Keeleigh Jones, a stay at home mom. "Totally normal and it changes day to day too," Jones told Kardashian. "Some days I barely looked pregnant, other days I looked like I was having quads it’s all about where the babies sitting." The reality star replied, "That makes sense too."

Another response was objectively unhelpful, but gave Khloe a laugh. Twitter user Carly Heading replied, "This is me daily from food, I wish I had something to birth." Kardashian responded with the laughing emoji.

Plenty of other moms responded, telling Kardashian that they had experienced the same thing.

A few moms suggested that maybe when babies sleep, they take up less space.

Another mom said that her baby's position seemed to affect the size of her bump.

This mom says a fluctuating bump size is completely normal, and that it depends on where exactly the baby is.

And a mom of seven suggested that as you eat during the day, the bump gets bigger.

The responses go on and on, with many moms telling Kardashian that they have experienced the same thing, and that it's nothing to worry about — and experts agree.

Dr. Jim Pivarnik, a professor of kinesiology at Michigan State University, studies the effect of exercise on pregnant women, as reported by Glamour. He says that all women carry babies differently. “What’s important is what’s inside, how well the baby is growing, and whether a mom is gaining enough weight,” Dr. Pivarnik told Glamour. “All of those questions are much more important than how you put the weight on and where.”

Sam McCulloch, a birth educator and doula, said many factors affect one's bump size on a daily basis — namely, the baby's position. "Babies are pretty active in the uterus. They move around and change position frequently, especially up to the end of the second trimester," McCulloch wrote for Belly Belly:

During the last trimester, babies usually favour a head-down position, but can move their backs from one side to another, or even move into a posterior position (baby’s back against mother’s back). Your belly will change shape and size depending on the position your baby is in.

She also noted that the amount of amniotic fluid surrounding a fetus can fluctuate as often as every hour, and that can affect the shape and size of a bump. Additionally, when a woman is pregnant, her internal organs have to make way for the baby. In some women, the baby pushes in front of the intestines, making the bump look super round; in other women, the intestines get pushed to the sides, making the bump appear bigger and flatter. Mystery solved!