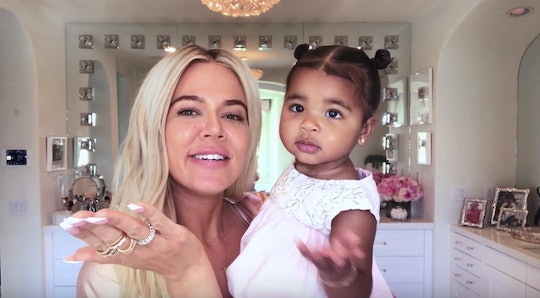 Khloé Kardashian's life has been a bit of a rollercoaster since she became a mom. Just before and well after welcoming her first child with ex-boyfriend, Tristan Thompson, the Keeping Up With The Kardashians star experienced a fair share of drama. But fans might be surprised to learn that Khloé Kardashian doesn't "hate" Tristan Thompson because helped give her the greatest gift of her life.

After officially getting together in 2016, the couple split in February 2019 when Thompson reportedly cheated on Kardashian with a family friend, according to People. In March, Kardashian tweeted that she and Thompson were working through their issues in private. "Tristan is equally to blame, but Tristan is the father of my child," she wrote. "Regardless of what he does to me I won't do that to my daughter. He has been addressing this situation PRIVATELY."

In spite of their ups and downs, Kardashian doesn't harbor any resentment towards him. During a recent episode of Keeping Up With The Kardashians, Kardashian stated that she was still in love with Tristan, and that they continue to work out their issues, according to Us Weekly. So, it makes sense why Kardashian would tell fans that she doesn't hate Thompson, especially since he is the father to their super adorable 1-year-old daughter, True. Earlier this week, an Instagram user posted a photo of Thompson side by side with True. "I know Khloé hates Tristan, but baby True starting to look just like him," the photo read.

But Kardashian immediately set the record straight in the comments of the photo. "Why would I ever hate anyone who helped create such an angel?" she wrote.

Kardashian continued, explaining that in spite of their differences, she will never harbor resentment towards Thompson — especially for the sake of their daughter. "People make mistakes but I won't hurt my own healing by holding onto hate," she wrote. "I'm too busy raising my beautiful baby and securing that money to hate any individual. Sweet True has always looked like her daddy. She's beautiful!!"

She has a point. Instead of holding on to bitterness or anger, she is making the smart decision by focusing her attention and energy on her daughter. And while True might look like her dad, her personality is exactly like her mom's. In fact, Kardashian recently told Us Weekly earlier this month that True is starting to take after her in so many ways — they both have the same sense of humor. "She dresses way better than I do and she looks just like her dad, but she acts I think just like me," she said. "She's crazy, basically. She's just silly and she's not shy. How I was as a kid is very much how True is."

Kardashian has been incredibly honest about the importance of making her daughter a priority in her life, especially amidst her personal drama. During a recent appearance on the podcast, Divorce Sucks!, Kardashian explained her philosophy behind this. "True is like one and a month old so she doesn't really know what's happening, but to me she does know," Kardashian explained, according to Entertainment Tonight. "She feels energy and I'm a big believer in that. So, I do everything in my power to not put any sort of heavy energy around her."

Kardashian is clearly doing a great job and is plenty busy focusing on raising her adorable daughter.