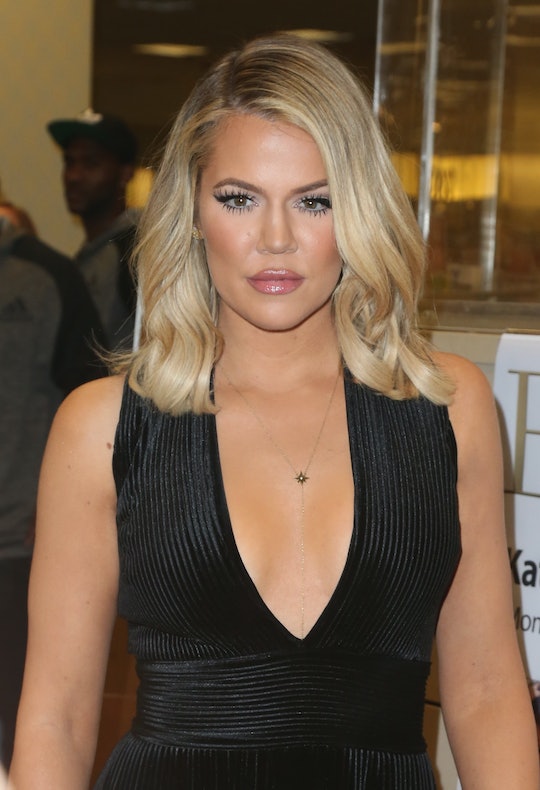 Khloe Kardashian Gives An Update On Lamar, Says "Every Day Is Better"

Khloe Kardashian stepped out to promote her new book, Strong Looks Better Naked on Tuesday, and naturally she was asked about estranged husband Lamar Odom’s condition. Speaking to Extra’s Terri Seymour at a book signing at a Los Angeles Barnes & Noble, Kardashian said that Odom — who was found unresponsive at a brothel in Las Vegas in October — was “definitely doing better," but that he still has many obstacles ahead. Kardashian shared that Odom is now no longer needing help from machines or life support, noting that “he is alive on his own, and no machines are helping him,” but says that he has a lot of “physical and cognitive therapy to go through” to help him recover, and that he will have to learn how to walk again before he can think about leaving the hospital. She also commented on how difficult it’s been, telling Seymour that "some days he's really strong, and some days he's weaker than the day before 'cause it's mentally draining, I'm sure, on him."

Despite their estrangement, Kardashian has been by Odom’s bedside since he was rushed to hospital for emergency surgery October 22. They have since called off their divorce — though Kardashian was quick to clarify that it does not mean they are getting back together. In a statement to People, Kardashian said,

“It's out in the media that we are back together, but I wish people understood that's not in our thought process right now. There are too many other important things, too many medical things...Tragedy does make you reassess a lot of things, but when it comes to our relationship, it's the same, except I'm here supporting him fully...But that does not mean I'm back with Lamar. That's a whole other thing that only time will tell. I can't tell you what tomorrow brings.”

Odom’s medical issues are surely incredibly difficult for both of them in different ways, but it sounds like Kardashian is doing her best to be there for him, while also giving herself a chance to focus on her own needs. In addition to promoting her self-help book — where she discusses personal struggles, her divorce, and her much-publicized weight loss — Kardashian was recently also seen out with boyfriend James Harden, who she says has been “really supportive” throughout Odom's health crisis.

Lamar Odom might still have a long way to go, but it definitely sounds like he has a great support in Khloe, despite their complicated relationship. And, maybe even more importantly, it sound like Khloe is doing her best to look out for herself too, which is something she absolutely deserves given all the ups and downs that she has faced over the past year. Here's hoping that this will be the beginning of a lot of positive updates for both of them.