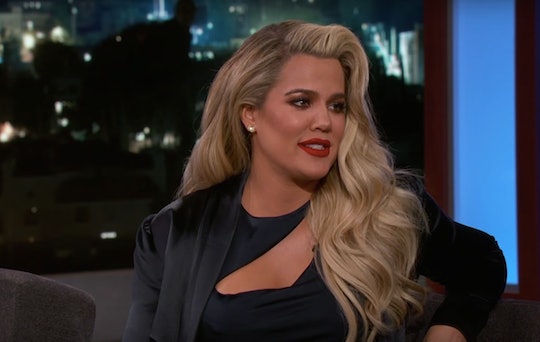 Pretty soon, fans will have a new Kardashian to keep up with. It's almost baby time for Khloé Kardashian and she is busy getting everything ready for her little one. After deciding not to give birth in Los Angeles, the mom-to-be has set up in her new home. For those of you who can't get enough of her updates, here's how Khloé Kardashian is prepping for her baby's birth in Cleveland.

Now that she's nearing the end of her third trimester, Koko is in the home stretch. A source close to the star told E! News that Kardashian and boyfriend Tristan Thompson have less than two weeks until their little girl makes her arrival. In the mean time, mama is busy handling last minute tasks in preparation for the new baby. "It was a mad rush to get everything to Cleveland and ready," the source told E! News. But she has plenty of help — her assistant is there to lend a hand with the little details like putting diapers away and putting together everything for the baby.

Kardashian's days of going back and forth between Cleveland and L.A. are behind her, according to another source at People. “Khloé is in Cleveland and plans to stay there until the baby is born. She is too far along to fly back and forth,” the source said. She's in full nesting mode at her and Thompson's home after eight months of regular travel between the two cities.

The plan has been to deliver in Cleveland for some time now, despite earlier reports that she would have her baby in L.A. And rather than have her rush back to L.A. to show off her new addition, Kardashian's family plans to head to Cleveland when it is time for the baby to come. "Khloé especially wants Kris there for the birth,” the source told People.

But that doesn't mean the entire family gets a free pass into the delivery room. Kardashian appeared on Jimmy Kimmel in January and told the host that "whoever is going to be the calmest," and "whoever will annoy [her] the least" will also be allowed in. Thompson, though, is absolutely required to be there, basketball schedule be damned.

Along with prepping herself and her family for the new baby, Kardashian has also been busy getting the baby's room together. TMZ reported in January that she was renovating the large walk-in closet off of the master bedroom into a nursery. Since then, Kardashian has provided her followers with an update on Twitter, sharing that she has moved on to the decorating stage. Still no public photos of the nursery, but hopefully those will come soon.

The final countdown to labor and delivery can be an emotionally complex time for an expectant mother. The combination of anxiety, excitement, and impatience is enough to make you long for labor pains. Judging by the comments from the sources close to her, Kardashian is right in the middle of that waiting game.

First-time moms' delivery experiences often deviate from their plans, but preparation is crucial nonetheless. Anything that can make those hectic first few weeks a bit easier is worth the effort. Now that the busier days of her first and second trimesters are over, Kardashian is free to get some much needed rest and enjoy the fruits of her labor. All of the planning and preparation that she put in early on will surely pay off — the baby will have a happy home waiting for her after the hospital, and lots of family around to provide love and support. There's not much more she'll need.