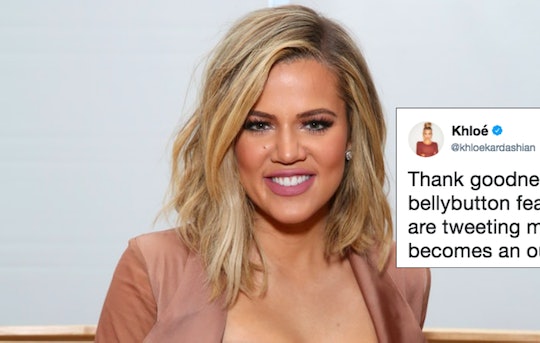 All of the changes that happen to a woman's body can be some of the more frightening aspects of pregnancy. Every mom-to-be and every pregnancy is different, and come with their own set of fears. Sharing one of hers while expecting, Khloé Kardashian is worried about her belly button changing during her pregnancy and her fans' reactions may be the best part of this storyline yet.

After receiving a product called "Bump Bows" in a pregnancy care package — which she described as "a bandaid or something like that" to ease irritation to a protruding belly button, Kardashian went on a Snapchat rant about how terrified she is that her innie belly button will someday poke out:

I have such a phobia with belly buttons and I know when you're really pregnant your innie will become an outie. Oh my God I can't even think about that. I'm so grossed out by that.

Her rant goes on from there, but you get the drift. Along with a few Snapchat videos, she also shared her fears on Twitter and fans had a lot to say in response to the reality star and fashion mogul. Lots of followers came forward to reassure her that her fears were not out of the ordinary and some even shared photos of their own bumps with her out of solidarity.

Some fans pointed out that belly buttons are one of Koko's more endearing and hilarious fears, but she isn't alone. Her open expression of her fears made her even more relatable to some. Apparently, the fear of belly buttons — also known as Omphalophobia, after Omphalo, the Greek word for navel, is more common than some may realize.

Along with a navel fear network, Kardashian's followers also shared with her some seriously beautiful pictures of their own bellies — some with belly buttons sticking out, some without.

As the moms of Twitter pointed out to Kardashian, it is completely normal for a pregnant woman's belly button to protrude, but not all women will experience this. Mom Junction explained that a belly button is simply a scar on the abdomen where the umbilical cord once was. As an expectant mother proceeds in her pregnancy, she will gain weight as the baby grows. The body will also retain fluids and grow amniotic fluid, leading the enlarged uterus to press against a woman's belly button. Because of this, the belly button will sometimes protrude — thus creating Kardashian's much-feared "pregnancy outie."

Unfortunately for the mom-to-be, pregnant women cannot actively prevent their belly buttons from sticking out, according to Mom Junction. But, if hers changes in a way that she doesn't like during pregnancy, it will likely go back to normal once her tummy has healed postpartum. If not, a simple procedure by a plastic surgeon can repair the area.

Kardashian isn't just afraid of how pregnancy will change her belly button. As she explained on The Ellen DeGeneres Show earlier this month, the whole navel situation gives her the creeps. While playing "Burning Questions" with the show's host, she explained that whales and belly buttons are her two biggest fears. Pregnancy has only made the latter fear worse. “And now I’m going to have to deal with the umbilical cord?" she said. "Freaks me out!”

In her defense, the umbilical cord thing kind of freaks me out, too. After birth, parents have to deal with the remains of their child's umbilical cord — a purplish stump, about a half inch to an inch long. The cord requires cleaning and care until it — gag — falls off.

Kardashian has lots of little moments like these to look forward to with motherhood. Dealing with changes in both her own and her baby's bodies is just par for the course with parenthood. Hopefully she continues to share her feelings so candidly.