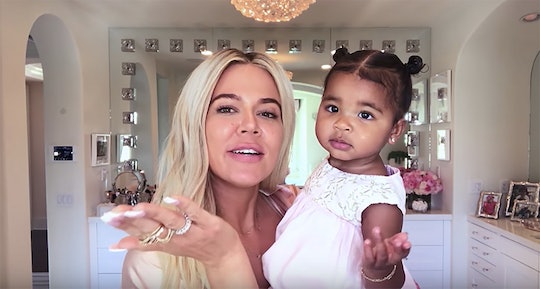 Sesame Street rang in its 50th anniversary in February, celebrating its gold milestone with multiple generations that have grown up with show. The Kardashians kids are included in this fan base, as evidenced by Khloe Kardashian's joke about her daughter True's "wild" obsession with Elmo. And although Khloe is happy to have an Elmo fan in her house, she's a little confused about how True became so enamored with the character in the first place.

"This Elmo obsession is wild!" Khloe posted on her Instagram story Saturday alongside a picture of True holding an Elmo doll, a precious sight to behold. The reality star also added, "She doesn't even watch TV. How did this happen?"

Of course, Khloe didn't mean loving Elmo is a bad thing. She's just curious how True was able to find out about the beloved character without watching TV. The power of Elmo is strong, I guess!

It doesn't really need to be said, but True liking Sesame Street is a big bonus considering the many academic and emotional benefits for toddlers. That's because the show is famous for sensitively tackling tough topics for children, like addiction and self care, to name a few examples.

Switching back to the topic of Kardashian kids' relationship to TV, it's not very big in their households. Case in point: Khloe shared in a post for her app (which has since been shut down) that her daughter won't watch Keeping Up With The Kardashians until she is at least 13, according to Marie Claire. Interesting.

Khloe isn't the only Kardashian limiting technology around the house. That's because Kourtney also limits the amount of time that her children can spend in front of a screen and Kim enforces "cell phone hours" for North, as noted in People. This also holds true for new mother Kylie, who has a no-TV rule in her house for daughter Stormi, according to a Rolling Stone interview with ex-boyfriend Travis Scott in 2018.

So what do the Kardashians do with their kids as an alternative to raising them on technology? It's widely known that North West loves doing hair and makeup just like her mother, while Stormi loves to dance to her dad's music.

As for Khloe, the busy mom is always out and about with her only daughter. Her Instagram shows that True keeps busy between building sandcastles on vacations, horsing around with her mom, and playing dress up. In an Instagram post last month, Khloe shared photos of True elbow-deep in the sand building castles as her mother lounged in the sun.

But just as the toddler can get down and dirty in the sand, she also showed the world that she enjoys being as glamorous as her mom. Dressed in pink from head to toe, True chose to dress up in a pearl-studded onesie and shiny booties for New York Fashion Week earlier this year, according to her mom.

For now however, it's clear Elmo reigns king in True's life. And honestly, who can blame her?