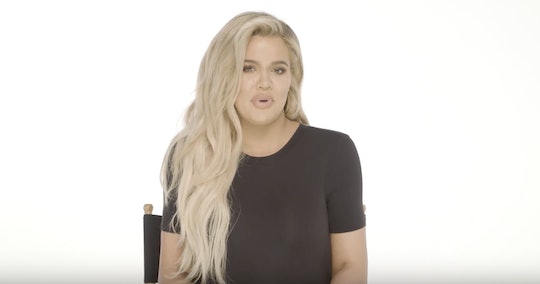 Pregnancy is obviously something that every first time mother has never experienced before. In spite of the warnings and stories people share, there is so much unknown and so much that is left for an expecting mother to find out on her own. Take Khloé Kardashian, for example. The reality star is going through her first pregnancy and has had plenty of people to warn her about what pregnancy might be like. But on Tuesday, Kardashian revealed the most surprising thing about her pregnancy and her answer will probably surprise you.

Fans waited for months for Kardashian to confirm that she was, indeed pregnant with her boyfriend, Tristan Thompson's baby. And now that it's confirmed, Kardashian has been opening up about all elements of her pregnancy. In a video for her maternity denim line, Good Mama, Kardashian got honest with her fans about her frustrations when it comes to shopping for maternity clothes (which is why she created her denim line). But what wasn't the only thing about pregnancy that Kardashian opened up about (thank goodness).

Kardashian said in the video, according to Us Weekly:

Kardashian has been active throughout her pregnancy, and if the videos of her working out are any indication, it's clear that she has been feeling great. Early on, Kardashian had shared videos of herself working out throughout her pregnancy. But because people can't have nice things, some people criticized her and shamed her for staying active, according to Entertainment Tonight. Kardashian even fired back at the haters, threatening in a tweet to stop sharing details about her pregnancy if the shame continued to happen. Some people (myself included) can't drum up the desire to work out when they're not pregnant, so the fact that Kardashian has felt good enough during her pregnancy to work out speaks volumes.

But you shouldn't feel bad if your own pregnancy was full of surprises compared to Kardashian's stress free pregnancy. Pregnancy symptoms are not the same for every single woman, according to Baby Med. For every woman who gets morning sickness every single day during their first trimester, there is another woman who has never thrown up throughout their pregnancy. And while some women experience pregnancy cravings, it is completely normal for other women to not crave anything new or unique during their pregnancy at all, according to Baby Center.

But Kardashian doesn't have much time left during this pregnancy. Just this week, Kardashian revealed that her baby will be here very soon. So she has had time to reflect and compare her pregnancy with her siblings. Because she has so many nieces and nephews, she probably has a good idea about the differences in every pregnancy.

While some people might miss this stage of Kardashian's life, her most exciting stage yet — being a mother — is right around the corner and her life is about to completely change forever. Because of this, it's probably best that a relatively smooth pregnancy has gotten her to this point.