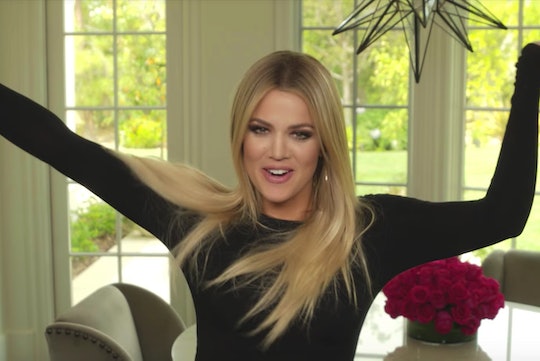 It is hard to believe that Khloé Kardashian gave birth a little over a month ago. But, on April 12, Kardashian and boyfriend, Tristan Thompson, gave birth to a baby girl named True Thompson — no middle name, just True. In the weeks since giving birth, Kardashian has remained pretty much silent about her daughter, which is a little out of character for the brutally honest reality star. But on Friday, Kardashian revealed the real reason why True doesn't have a middle name, finally giving fans more insight about her baby girl and life as a new mom.

When Kardashian gave birth to her daughter in April, according to Us Weekly, she remained pretty quiet on the matter, focusing on her life as a new mother than focusing on posting to her social media accounts — which was totally OK. But four days after giving birth, Kardashian took to Instagram where she revealed that her and Thompson had named their daughter True.

You can't blame Kardashian for not being able to find the perfect middle name. Finding the right name for a baby is hard — it's thing one thing that will stick with them for their entire lives. It's a lot of pressure for a parent to find one right name for their child, let alone two.

Luckily for Kardashian, she was able to settle on one name — and although some people on Twitter weren't too fond about the name choice, according to Cosmopolitan, Kardashian later revealed that True is a "family name" that stuck with her during her entire pregnancy, according to E! News.

But just because True doesn't have a middle name now doesn't mean she won't have one eventually. In the same post on her app on Friday, according to Us Weekly, Kardashian revealed that she might give True a middle name eventually when she does end up finding the right one for her. "I plan to take my time and decide if I'll give her one at all," Kardashian wrote. "I can add it at any time and it's easy to get on the birth certificate."

Given how much time Kardashian has been spending with her daughter as a new mom, there are no doubts that Kardashian will end up finding the right middle name for True. Whether that will take her four months or 10 years is anyone's guess.