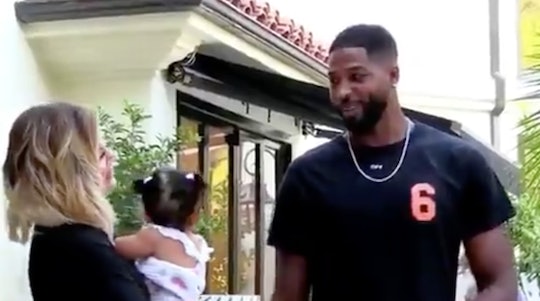 Now that Khloé Kardashian has announced her pregnancy with boyfriend Tristan Thompson, she hasn't been able to stop talking about her pregnancy — and I don't blame her. Khloé had to keep her pregnancy a secret for months after finding out she was pregnant. And now that the news is no longer a secret, it is something that everyone wants to hear all about. Like this past week, Khloé revealed how she told Tristan she was pregnant and the story really is super sweet.

On Monday, Keeping Up with the Kardashians fans got to watch as Khloé took a pregnancy test, found out she was expecting, and then break the news to every one of her family members (including sisters, Kourtney and Kim Kardashian), all in the same episode. Fans also got to see the very important and exciting moment where she told her Tristan that he was going to become a father for the second time (he is already a father to his son, Prince, with his ex-girlfriend, Jordan Craig). But Khloé took to her blog on Tuesday where she gave fans the low-down on that specific moment on the show. Khloé explained, according to E! News:

Tristan was the one who kept telling me, "I think you're pregnant." He was leaving town to go back to Toronto, and I went to get a pregnancy test. I actually had to FaceTime him to tell him. I was nervous, and he was so excited!

I'm so blessed that Tristan has been beyond supportive! He's helped me overcome any fear or anxiety that I have! He's always so reassuring and confident about everything when it comes to our baby. Having a partner that is equally as excited as you are, and is such a support system is crucial! Tristan has been an angel to me! This process is trying — physically and mentally — but Tristan has made everything as easy and beautiful as it can be. More than I can have imagined.

But Kardashian fans know that this isn't the first time that Khloé revealed how she broke the news to the NBA player. During an interview on Jimmy Kimmel Live!, earlier this year, Khloé revealed to the show's host, Jimmy Kimmel how she, herself, found out about her pregnancy before fans got to see it play out for themselves on KUWTK. Khloé told Kimmel how each person close to her found out about the news, according to People:

First it was Tristan because he kept saying, "You're pregnant," and I was like, "Be quiet, I'm not pregnant." I was nauseous, not feeling well, and he had to leave the country. I took a pregnancy test and I was screaming. It's so weird and surreal. So it was Alexa, my assistant, Tristan, and I. We were the only ones that knew for a few weeks until I was able to tell my family. He was out of the country and we wanted to be able to tell everyone, together.

And they did just that. Fans got to watch the exact moment they announced their pregnancy to Khloé's family members, during the episode on Monday, including her rumored-to-be-pregnant sister, Kylie Jenner, who congratulated her sister from afar through Facetime.

Telling anyone you're pregnant is a huge moment, let alone the father of the child. While Khloé appeared nervous in the clip from the show, it is obvious, judging by her blog post, that Tristan's support for Khloé is helping her a ton and it's a safe bet that he'll be an amazing partner throughout this whole parenthood thing.