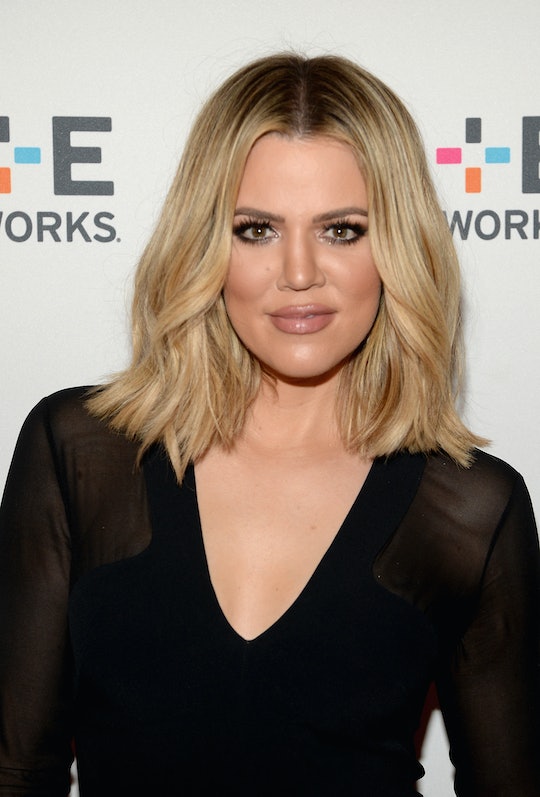 Kardashian fans are freaking out over Khloé's impending delivery of her first child (any day now!), but the mother-to-be herself is surprisingly chill about the whole thing, at least according to a new post on her website. On Monday, Khloé Kardashian revealed how she's feeling about giving birth, saying that she's "not afraid," according to Us Weekly. Turns out that, even though this will be her first child, she's very familiar with the birthing process.

In a post entitled "Why I'm Not Afraid About Giving Birth," the reality TV star wrote, "I’ve seen over eight births live and in person. Women were made to do this!" Still, that doesn't mean that she's checked out, or assuming that the whole thing will be a piece of cake. According to Us Weekly, she wrote that she looks at her pregnancy apps "every day," and goes to her OB-GYN with any questions that might come up. "Of course I'm a little nervous to go into labor," she continued, "but I'm trying to not overthink something that literally happens all the time."

Sure, women do successfully give birth every day, but that isn't always much solace when you know that, at any moment, a newly-formed being will start pushing its way out of you, and that it is going to hurt. Still, it's admirable to at least try not to freak out.

Khloé's own sister, though, revealed that sometimes not freaking out is easier said than done. In an interview with Entertainment Tonight, Kim Kardashian West, who has been through the whole childbirth process before, said:

You cannot tell [Khloé] anything right now that's too sensitive because she's just so freaked out. So, I can't really get into the whole, like, nipples and breastfeeding thing. She's just going to have to figure that all out and slowly.

Kim has full faith in her sister's abilities, though, adding:

Khloé, age 33, is set to give birth to a baby girl with boyfriend (and Cleveland Cavaliers NBA player) Tristan Thompson. As the two wait for their bundle of joy to arrive, they're reportedly nesting in Cleveland, where Khloé plans on giving birth, according to People. Khloé shared on social media that she was trying to stay busy in the home stretch of what many on the internet feel like has been the longest pregnancy ever. Activities apparently include finishing the baby's nursery, taking 45-minute walks ("I’d actually call it more of a stroll, LOL," Khloé wrote), and watching a whole lot of Billions.

And all in all, she's relieved to be in Cleveland with Thompson, where things are a little more relaxed, rather than in L.A. with her family. As she shared on her website and app, according to People, she got tired of traveling back and forth, saying:

Throughout my pregnancy, I traveled back and forth between L.A. and Cleveland quite a bit, but after a while, it was a little difficult. It was more tiring and my body got swollen, which never used to happen before pregnancy. I obviously love both cities, but I will say I’m happy to be in Cleveland right now.

At any moment, Khloé could have some huge updates for her fans. According to a recent tweet, she's got her hospital bag all packed.

Khloé may be trying to stay calm, which means that many of her fans are happy to do the freaking out for her.