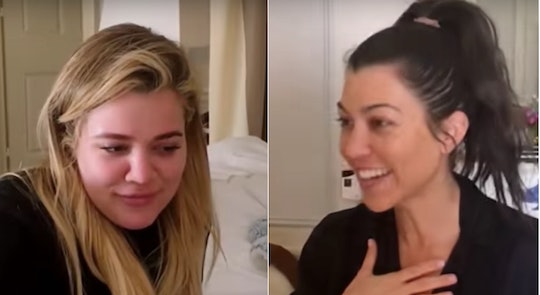 Khloé Kardashian *Finally* Reveals The Sex Of Her Baby On 'KUWTK'

The moment has finally come. On the season finale of Keeping Up With the Kardashians, Khloé Kardashian revealed the sex of her baby and she is having ... a girl! After months and months of waiting for the big reveal, fans can finally relax now that they've learned this piece of information about Kardashian's baby-to-be, who is expected to arrive in just a matter of weeks.

While totally exciting, Sunday night's reveal on the KUWTK season finale was definitely expected since Khloé previously revealed on Twitter that she would break the news on an upcoming episode of the show, though she didn't specify exactly when it would happen at the time. In a teaser for tonight's episode, according to ELLE, Khloé fills in her sisters, Kim and Kourtney, after asking, "You want to know what I'm having?" And tonight, she let fans in on the secret, too.

Before tonight’s episode aired, Khloé posted a video on Instagram on Sunday afternoon, telling the camera in a confessional, “I am pretty much convinced that I’m having a boy … I have such anxiety and nerves.” Then in the episode, Khloé explained that she had asked her doctor to tell her sister, Kylie Jenner, the baby's sex and she'd then share the news with Khloé over the phone. Leading up to the reveal, Khloé tweeted a photo of a gender reveal cake that Kylie had sent her, which only added to the anticipation.

"You're having a girl!" Kylie tells Khloé over phone. "You're lying... shut up," Khloé replies.

"Why would I lie about this?" Kylie tells Khloé, who's noticeably upset to hear the news. "I don't feel like I'm having a girl at all .... I'm like in a state of shock," Khloé tells her sisters.

Not only was Khloé shocked by the news, but fans closely following her pregnancy were also certain that Khloé was expecting a baby boy as well, mostly thanks to lots of anonymous sources telling publications that she was pregnant with a son. Also, Khloé herself helped fuel these rumors when she previously told told Ellen DeGeneres that they'll likely go with the name Tristan Thompson Jr. if they have a boy — named after Khloé's boyfriend and father of the child, NBA player Tristan Thompson — but didn't have a name picked out for a girl.

On Sunday night, Khloé shared that she still wasn't sure what she'd name her baby girl. "I think a T but a K is an option as well. That’s as far as I know," Khloé replied to a fan on Twitter asking if her daughter would also have a name with a "K" to follow the family's tradition.

She did admit, though, that she really did have a named picked out for a boy, but is still struggling to settle on the perfect moniker for her daughter. "It’s so hard!!! Lol I knew the name if I was having a boy. So now I really have to figure this out," she replied to another fan inquiring about baby names on Twitter on Sunday.

Khloé may have been surprised at the time to hear that she was expecting a daughter, but now she seems so happy to have a baby girl on the way, who will be roughly the same age as Kim and Kylie's newborn daughters, Chicago and Stormi, respectively. "I am now so excited my daughter will have forever best friends with Chicago and Stormi!! God is great!!! Thank you Lord for our princess," Khloé tweeted.

So, when is Khloé's little one expected to arrive? In a Twitter response to a fan online, Kardashian tweeted on Dec. 25 that she would be six months pregnant in one week. Then on Jan. 2, Khloé revealed on Instagram that she was "officially" six months pregnant. This means, Khloé should give birth in April, which if you haven't looked at a calendar recently is really, really soon. While she and Tristan may not have decided on that perfect name yet, that news will come sooner than you think and their baby girl will be here before you know it.