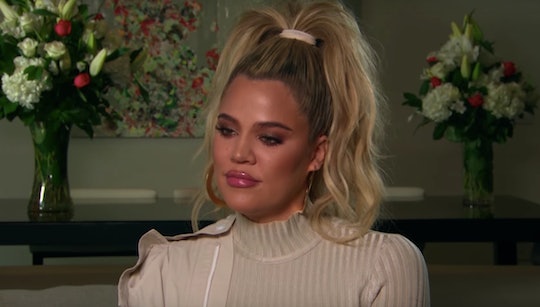 Babies can be a wonderful addition to a family, but it can be a mistake to believe that they could magically strengthen a hurt relationship or repair old wounds. In a recent interview, Khloé Kardashian said her strained relationship with Caitlyn Jenner won't be fixed by her baby, and her admission is completely understandable. While babies bring lots of joy and happiness to families, there's clearly a lot of healing that needs to go on between Khloé and Caitlyn.

Khloé's comments follow Caitlyn's recent interview on ITV's Piers Morgan’s Life Stories, in which she stated that she "didn't trust" the Kardashians and opted not to share the last few pages of her memoir, Secrets of My Life, with the family when she gave out advanced copies, as People reported. These final pages explain her gender identity transition, according to People, and she told Morgan that she was worried about her story being shared with the media by the Kardashians before the book's release.

"I didn’t want them to leak it to the press, okay? There was no reason for them to know about it. I didn’t tell anybody. Why? It’s none of their business. It’s not that big a deal," she said, according to People.

Suffice it to say that the Kardashians thought what was in her book was a bigger deal than Caitlyn did. Relations were further strained when Caitlyn released her book, which didn't paint a very pretty picture of how Caitlyn's ex-wife Kris Jenner handled her gender identity crisis. Khloé explained to her former stepparent in an episode of Keeping Up with the Kardashians that she had kept her distance out of respect for her mother, according to a clip posted by E! News:

It was very hard for me to experience a lot of new things so quickly and still feeling like I have to protect my mom and certain things that were happening where I felt like they might not have been the most positive. But then I was also like, "This isn’t even my fight to fight anymore. I have my own s— to deal with, so why don’t you guys figure that stuff out."

Caitlyn revealed during the same Piers Morgan’s Life Stories interview that it has been two years since she and Khloé have spoken, according to Entertainment Tonight. In fact, Caitlyn hasn't remained on speaking terms with anyone on the Kardashian side of the family, despite her continued communication with her biological daughters, Kendall and Kylie Jenner, as she shared in the same interview.

Following the birth of Kylie's daughter Stormi, Caitlyn shared a message on Instagram expressing her joy over becoming a grandparent. "My daughter just had a daughter. It's amazing to be by your side through this journey," she wrote. "She's SO beautiful already. Can't wait to watch her grow."

The back and forth between Caitlyn and Khloé has been raging since her 2015 Vanity Fair cover, which announced her to the world as Caitlyn and included an interview with comments on her relationship with Kris. Caitlyn accused Kris of knowing more about her gender identity crisis than she let on, as well as being cruel and treating her poorly throughout their marriage, according to Cosmopolitan.

Khloé has not shied away from sharing how Caitlyn's comments about her mother impacted her. She appeared on The Ellen DeGeneres Show in 2015 and explained that she had a hard time understanding Caitlyn's transition because she found out about it on camera, rather than being filled in privately. According to E! News, she told DeGeneres:

We kept asking him, "Bruce, like what's going on? We're hearing all these rumors?" and he kept telling us one thing but really he knew he was transitioning and wouldn't be honest with us. So really we felt like the last to know so that was hard for us, especially me.

Considering the pain that she went through finding out in that way, and the continued animosity between the family members, it's totally understandable that she doesn't see motherhood as a solution to their problems.