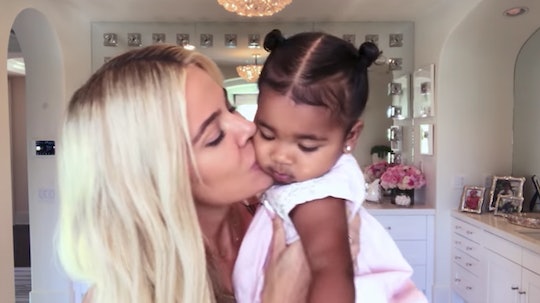 After a breakup, particularly a messy one, keeping things civil for the sake of the kids can be tough. But presenting a united force in parenting is perhaps even more important when mom and dad aren't together — even when it's tough going. Case in point, Khloé Kardashian shared just how difficult it is co-parenting with Tristan Thompson after their falling out over the last few months.

Kardashian recently appeared on On Air With Ryan Seacrest to discuss the new season of Keeping Up With the Kardashians and opened up about raising her daughter True with Thompson. True's first birthday party was held shortly after their breakup and that was far from easy. "So everything was really raw and fresh, and that was really hard," Kardashian said, adding that fans will see much of that in the show's new season, according to Cosmopolitan. As you may recall, according to People, Thompson was involved in a cheating scandal earlier this year with Kylie Jenner's best friend, Jordyn Woods, which ultimately led to their breakup.

Kardashian went on to explain in the same interview with Seacrest the importance of birthdays spent together. "I always wanted that to be obviously a mommy and daddy thing. In my family it is everyone who is going through this breakup," Kardashian said, according to Entertainment Tonight. "So I knew in my family it was going to be a lot of high tension, but I still wanted to do what was best for True."

Ahead of True's birthday, according to Page Six, Kardashian shared on Sunday night's episode of Keeping Up With The Kardashians that she and Thompson tried therapy in the aftermath of their breakup, though the session via FaceTime "didn’t go as well as she had hoped."

On Twitter, Kardashian shared that while she "[looked] really calm at [True's] party" she "was so nauseous and filled with anxiety the entire day." Although it was certainly a difficult day for her, Kardashian wrote in another tweet that she's glad she allowed Thompson to be a part of their daughter's party. "Sometimes our personal emotions get in the way of what is best," she wrote. "I’m so happy I didn’t allow that to happen for the sake of True."

This isn't the first time that Kardashian has spoken out about her desire to work with Thompson to ensure that True is lovingly cared for by both of her parents. Back in May, she spoke on the Divorce Sucks! podcast about her struggle to keep her emotions in check while dealing with her ex.

“It does f*cking suck because our personal emotions are still in there," she said, according to MSN. “So those emotions can be heightened at times, but I do everything in my power — True is one and, like, a month old — so she doesn’t really know what’s happening, but to me she does know and she feels energy and I’m a big believer of that." She added, “I do everything in my power to not put just any sort of heavy energy around her. Maybe that sounds are a little too bohemian to some people.”

Kardashian's belief in the importance of co-parenting extends beyond raising her own child as well. In a recent interview with Entertainment Tonight, Kardashian appeared with Scott Disick, Kourtney Kardashian's former partner, to talk about raising kids with exes. "It's hard work for all parties," she said, as Yahoo! reported. "I think for you, Kourtney, Sofia, they're all just really strong. I'm so proud of them, and I'm so proud of them promoting that and hopefully inspiring other people. It's a beautiful thing to get along with each other and for your kids to see that."

She went on to explain how co-parenting varies from one family to another. "I think they're doing amazing, and I think everyone has to handle their co-parenting situation in their own style, but my mom and my dad were like that."

No matter what your co-parenting style is, the key to success is in keeping your child at the center of your efforts, as Anna Giannone, Certified Master Coach Practitioner and Co-Parenting Coach, explained in an article for HuffPost. "Your children need to know they are front and center in both your lives," Giannone wrote. "Sending this message of undivided love begins with considering doing the unthinkable; reconciliation. This shows your children they matter; that they are significant and loved by their parents and stepparents."

By striving to work together with Thompson despite their rocky past and to enable him to be a positive influence in True's life, Kardashian is doing just that. It's not surprising that emotions are raised when co-parenting after a difficult breakup, but it is refreshing to see parents pushing through the awkwardness for the sake of their children.