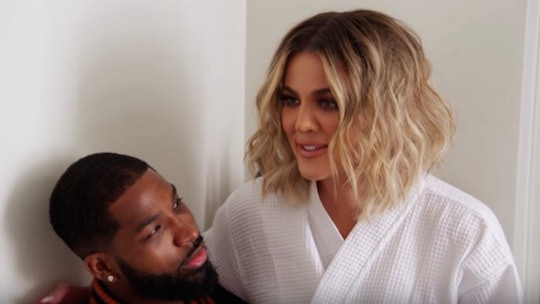 April is just around the corner — which means the countdown until Khloé Kardashian gives birth to her first child is officially on! Yes, the Keeping Up with the Kardashians reality star and her NBA boyfriend, Tristan Thompson, will soon be welcoming their first child together. (Thompson has a 1-year-old son from a previous relationship.) As revealed in the season finale of KUWTK, the couple is expecting a baby girl. And to pass the time until she meets her daughter, it seems Kardashian has been daydreaming about who her little bundle-on-the-way will ultimately become. In fact, Khloé Kardashian shared what she hopes her daughter inherits from her and what she hopes she'll get from Thompson. And parents will totally relate.

E! News reported that Koko took to her app on Monday to give fans a personal look into what traits she wants baby Thompson to have. "I can't wait to meet my baby girl!" Khloé wrote in the new post. "I often think about what she'll look like and what her little personality will be like. She'll be the perfect mix of me and Tristan — which is such a crazy thought, LOL. Check out some of the traits I hope she inherits from each of us, and stay tuned for Part 2!"

As far has dance moves are concerned, the Good American designer hopes her baby girl inherits Thompson's moves, Entertainment Tonight reported. However, it looks like the mom-to-be hopes their daughter will take after her mama in the style department. (And I can't say I blame her.) Baby Thompson's intelligence would ideally come from both parents, Kardashian revealed — just in different ways. "I want maybe TT's IQ and my street smarts," Kardashian wrote, adding she hopes her daughter will inherit Thompson's athleticism. "We are both beasts though!" As for good looks and charm, here's what Koko had to say:

We are both charming but TT is pretty cute!

Two other traits Kardashian said she'd like to pass along to her baby girl are her work ethic and her patience. (Too sweet!)

Honestly, I love that Kardashian is being so open about her hopes and dreams for baby Thompson. I spent my fair share of time during pregnancy daydreaming about what my babies would be like, especially with my first child. In my mind, I was carrying an infant with a ton of dark hair — except, a baldish-blondish baby boy came out instead. These days, our son is tall like my husband. But he's also stubborn like me, never stops talking like my husband, and is still blond-haired, light-complected, and blue-eyed like his mama. Mostly, though, our son is entirely his own person. (The same goes for our two daughters.) It never ceases to amaze me how all three of our children came from the same gene pool, but they're just so different. Procreation is weird like that, I guess.

As Us Weekly reported, Kardashian is chilling out in Cleveland — where Thompson plays for the Cavaliers — for the remainder of her pregnancy, and plans to give birth there, too. Her doctor even plans to fly to Ohio for the big event, Kardashian revealed in her birth plan on KUWTK in February. We're soooo close at this point, guys!

As Khloé Kardashian will soon discover first-hand, parents love their children regardless of the physical/personality traits they end up with. I mean, it's not like you can do much about either, anyway — other than guide them and help shape their values along the way.

Still, the possibilities are fun to imagine. Especially during those last few weeks of pregnancy, when time drags on and nesting is driving you mad. Hang in there, Koko! You've got this.