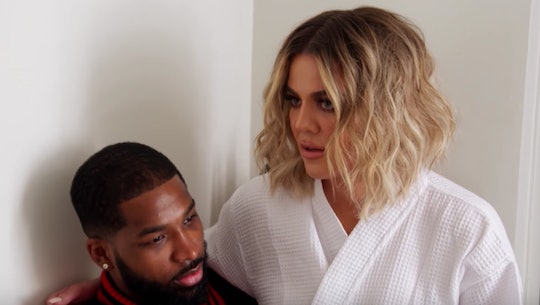 Khloé & Tristan Are Reportedly Back Together, & Fans Have A *Lot* Of Opinions

Just days before Khloé Kardashian gave birth to her first child, a daughter named True Thompson, with her boyfriend, Tristan Thompson, it was reported that Thompson had allegedly cheated on her while she was pregnant, according to the Daily Mail. But a lot can happen (and has transpired) since Kardashian gave birth on April 12. These allegations, understandably, caused some reported tension between the couple. Now, almost a month later, Kardashian and Thompson are reportedly back together — and of course, people have a lot of opinions about this. Romper reached out for comment but did not hear back at the time of publication.

This is a stark contrast from just a few weeks ago, when Kardashian was reportedly "completely devastated" over the allegations, according to Entertainment Tonight, where cameras purportedly caught Thompson kissing another woman, according to the Daily Mail. These allegations understandably had Twitter users mad — and the fact that Thompson and Kardashian are now reportedly back together has the some Twitter users pretty upset, too.

People on Twitter were rallying behind Kardashian to be confident and independent in the wake of the allegations with Thompson. "I hope she wakes up and knows her WORTH. He's definitely not WORTHY," one Twitter user wrote. "Khloé, now you know better. You can't change that type of man, that repetitive behavior, he's not finished..girl, no," another Twitter user added.

Other users were upset at Kardashian for even getting just an afternoon meal with the father of her daughter. "I felt sorry for her when it happened," one user wrote. "I can promise you, when it happens again, I won't feel the least bit sorry for her."

But getting mad at Kardashian is not the reaction that fans should have about this news. If anything, they should be supportive of Kardashian. Sure, what people read might look bad, but fans don't know the full scope of the situation. Only Kardashian, Thompson, and those closest to them really know whats going on. Kardashian is now a mother and every decision that she makes is done with her child in mind. You have to respect that — whether this lunch means that they're reportedly back together or just having a conversation about their newborn.

She's concentrating on just that — just being a mom, her baby. And I think that's what her sisters are doing, as well.

At this point, given everything that Kardashian has likely gone through in the wake of this reported news and giving birth so soon right after, her happiness should be a priority. So the fact that she is happy, according to Jenner, is awesome. Especially since this comes on the heels of the news that Thompson and Kardashian are reportedly living together again, according to People. "She's focused on keeping her family together," a source told People of Kardashian. "She seems OK with Tristan — there's no talk of a split."

Whatever the case may be, people now need to respect Kardashian's decisions. Regardless of those decisions, people will have feelings about them, which they made clear on Friday.