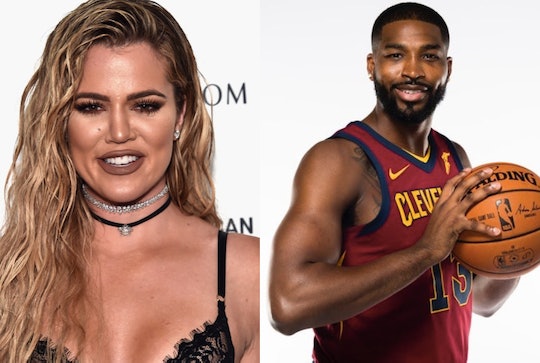 Khloe Kardashian & Tristan Thompson: A Timeline Of Their Adorable Relationship

On Tuesday, news broke that Khloé Kardashian might be pregnant with boyfriend Tristan Thompson. Of course, every Kardashian fan is freaking out at the idea of not one, but possibly three Kardashian sisters having babies all around the same time, given the rumors that Kylie Jenner is also reportedly expecting, along with Kim Kardashian and Kanye West's reported surrogate news earlier this month. But if you look at the timeline of Khloé Kardashian and Tristan Thompson's relationship, this still-unconfirmed pregnancy news isn't actually all that surprising.

Really, since going public last year, Khloé and Thompson have been super hot and heavy. During the season finale of Keeping Up With The Kardashians this summer, Khloé even said that Thompson and her had discussed having children. (He has a 9-month-old named Prince with ex-girlfriend Jordan Craig, already.)

According to Entertainment Tonight, Khloé said during the finale of the Cleveland Cavaliers center:

Romper has reached out to Kardashian's representatives for comment, but has not heard back at this time, so there's no confirmation yet about whether the pregnancy rumors are true. But if they are, Khloé and Tristan's romance timeline show that this might be the next step for the couple.

According to Us Weekly, Khloé and the basketball pro met when two friends set them up together. They were first spotted hanging out and holding hands back in August 2016. Khloé told Ryan Seacrest in Us Weekly's KUWTK Ten Year Anniversary Special that it was love at first date. She said:

Brandon Jennings, who’s a basketball player, he’s a friend of mine and Malika's, and he’s like, "You’re such a good girl, I want to introduce you to someone." I was at the Bel-Air Hotel. He came to the dinner, cause I didn’t want to go on a blind date, so Brandon kind of ambushed the blind date. So I had a bunch of people, and he brought him, and we just connected.

Although paparazzi had spotted the couple out and about together during August and September, the first sign of true love was this Instagram post with two hands and a simple heart emoji. No names, but those in the know put it all together.

And By Halloween They Were Total #RelationshipGoals

The mystery man obviously wasn't introduced to the world yet as her beau, but her Instagram followers knew what was up.

The Holidays Were Spent Together

These two even coordinated their outfits for Christmas.

Already, these two were making us all swoon.

February Was All About Love In The Sun

Judging by their Instagram accounts, the couple spent some time in the sun together for Valentine's Day in some tropical locale.

Finally, He Makes His KWUTK Debut

In March, Khloé finally introduced her fam to Thompson, and her BF to the entire world when she invited him to Kanye West's concert in March 2017.

By April, It Was True Love

In April, Khloé told ES Magazine that she was in deep and had never felt "this kind" of love. She said that would definitely marry Thompson and settle down with him. Khloé told the magazine:

I would love to have a family. We’ve talked about it … I know for a fact that he would be an impeccable father. I definitely want to be a mom. But I don’t put the pressure on it. It’s not like, "The clock is ticking." I feel in my soul it will happen.

They Spent Most Of The Summer Together

Paparazzi caught the couple hanging out together all summer long, although they stayed fairly private on social media.

Now, She's Always In The Stands

Khloé and her entire family are no strangers to the Cavaliers' stands.

Although it might be just over a year since Khloé and Thompson made it "Insta Official," a pregnancy announcement wouldn't be totally out of left field. If only because by all appearances, at least, this couple is going places.