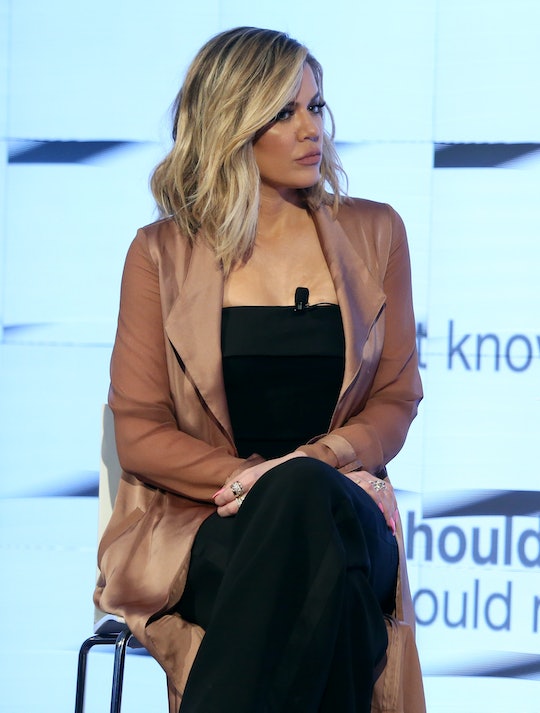 Khloe Kardashian Was Spotted With A "Baby Bump" & Everybody Calm Down, OK?

There may very well be a whole new set of Kardashians to keep up with in the coming months, if you believe what the rumor mill is churning out these days. Yes, it's easy to put every statement and photo under the microscope, but it's also incredibly inappropriate to do so. And though Khloe Kardashian was spotted with a "baby bump," commenting on how pregnant she may look without her having confirmed anything is just plain old body-shaming — which, in case the recent epidemic of baby fever has made you forget, is seriously wrong.

TMZ shared a photo of Kardashian out and about in New York City, sporting a venti cup of something hot and an even hotter fur jacket. From this image, people have come to the conclusion that she is dressing to accentuate a pregnancy. The so called "proof" of her pregnancy is what the article refers to as "blouse buttons [that] are working a little harder these days," as TMZ put it. Yikes.

Unfortunately, it only gets worse from there. Commenters on the article seem to have taken this declaration as permission to say any and everything that they think about Kardashian's body. Along with simply calling her "ugly," and saying things like "exciting times as Chewbacca will soon be giving birth to a baby Wookiee," they also went in on specific parts of her appearance.

One such commenter wrote, "That’s just Khloe returning to her old form," while another said, "Tristian [sic] better ask for 9 extra stitches, when the Dr. Does the episiotomy on her after the birth to tighten up that canyon of hers!!!" Excuse me while I get violently ill.

Not only did the haters go after her body and her looks, it was also open season on her alleged pregnancy. Statements like, "Someone should punch her in the stomach," and "I will put money on this. The kid is going to be born with a severe disability, may even be premature," abound in the comments section of the TMZ article.

With anywhere from 10-25 percent of all clinically recognized pregnancies ending in a miscarriage, as reported by the American Pregnancy association, these comments are so very far from humorous. Another person even wrote, "Please God, bring SIDS to the spawn of satan." I seriously just can't with these people.

Along with being straight up offensive, headlines and comments describing Kardashian as pregnant are textbook body-shaming. Tia Mowry went through a time in 2015 when everyone and their mother were speculating that she was pregnant as well. She spoke with People about seeing comments addressing her figure on social media and explained that saying these things is hurtful and absolutely classifies as body-shaming. She told the outlet that people are actively looking for flaws:

It’s pretty unfortunate. We live in a society that is so obsessed with being perfect. Why can’t we just be us? Someone even wrote on my Instagram today, "Looks like you’ve picked up a little weight. I hope you lose it. I want you to lose it." It’s like, really? Why would you say that? Why do you feel the need to say that?

While Kardashian has yet to respond to the horrid things people are saying about her, I think that she would agree with Mowry on the need for people to keep their mouths shut when they feel the urge to criticize someone's figure. The last time that people claimed to see a "baby bump" was when Kardashian went out in a pair of high-waisted jeans. Not that it is anyone's business, but she has spoken openly about her body changing shape and size often and how she enjoys dressing to her body. At her Good American denim brand promotion, she told People:

None of this is even to say that Kardashian's weight has fluctuated at all. Apparently the commenters on the "baby bump" article have forgotten that any number of factors aside from pregnancy can make clothes to temporarily fit a little more tightly, such as eating literally anything at all and drinking coffee — which her Starbucks cup suggests that she was doing around the time this photo was taken.

Maybe Kardashian is pregnant, maybe she had a big lunch — maybe, just maybe, none of these things are going on at all and a photo was taken at an angle that didn't show off her incredible "revenge body" to its fullest extent. Until she makes a statement of her own, no one can know for sure. Ultimately, the main takeaway from this photo and accompanying article is that it is nobody's damn business.