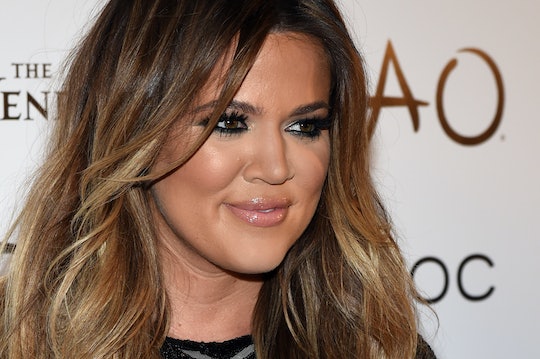 Khloe Kardashian Won't Freeze Her Eggs, But That's Not Why She's The Best

It might be Kendall Jenner’s birthday, but Khloe is still making news. Tuesday in an interview with Yahoo, Khloe said she's not freezing her eggs, in addition to weighing in on waist trainers and admitting that it’s sort of fun to show her little sisters up in a great dress at a party. In an interview with Yahoo Style’s Joe Zee, she said that Kim and her mom are always asking her about freezing her eggs. Her response? “How old do you think I am?”

Not that you have to be old to freeze your eggs, but Khloe has a point. She may be the second oldest sister in the Kardashian clan, but 31-year-old Khloe isn't exactly over the hill. Besides, she has a few other things going on. She just spent the better half of October at Lamar Odom’s bedside, reviving not just rumors of their relationship but also the press attention that comes with, well, being a Kardashian. It can’t be easy. Let’s not forget that despite her fame, Khloe is still just a 31-year-old woman trying to keep it together. Today she opened up about “being the fat one,” loving yourself, and balancing her mom and her fame.

Who would be able to deal? Khloe has to put up with constant comparisons to her sisters and haters on social media talking about her waistline. Seriously, what gives? Fortunately, Khloe is more than capable of speaking for herself, if anyone cares to listen. Here are four quotes from Khloe's Yahoo interview that basically prove she's the best:

On Being The 'Fat' One

I never felt that I was ever big. I never looked at myself like 'Oh my god, I was the fat one.' Other people called me that so I would say that to beat them to the punch...Kim would wear the same dresses and they would always do a side by side. 'Who wore it better?' You know who wore it better. It was Kim.' But I felt so good.

It really comes from loving yourself from within. If Instagram were to take a picture of your soul, what would that look like? I know my soul is beautiful and I know I'm a good person. But that came from fat Khloe and that's gonna come from skinny Khloe. That will never change for me.

On Her Little Sisters

This 18 year old little isn't going to show me up...we're very competitive about it. But in a fun, friendly way, and I have to show her that mama can still get it.

On Being Missy Elliot At The Gym

I wear a sauna suit. It's basically like you're wearing a black garbage bag... I'll do that at Equinox and people think I'm nuts. I look like I'm wearing the Missy Elliot suit and I look crazy, but I don't care...People respect me at the gym.

Whatever it takes, Khloe. She's by far the toughest, most outspoken sister. And if you can't stand the rain, just get out of her way.