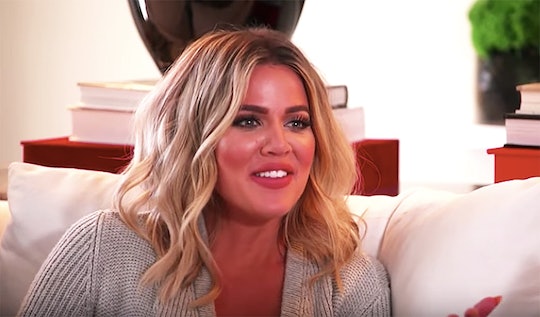 Being in the public eye can be a wild experience, especially if you're a baby who doesn't necessarily understand the concept of fame. Fans witnessed this firsthand on Sunday, when Khloé Kardashian shared a video of a delighted yet confused True Thompson watching Keeping Up With the Kardashians on television. Even if you've never seen KUWTK before, there's a good chance the adorable clip of the 1-year-old will make you say aww.

KUWTK has been on the air for a whopping 12 years, during which eight births within the large brood have occurred (Mason, Penelope, North, Reign, Saint, Chicago, Stormi, and True). Translation: KUWTK has been in these kids' lives forever. But just because they might be used to the cameras being around, it doesn't lessen the initial shock of seeing your love ones on television. A good example of this? Look no further than True's reaction to watching Sunday's episode of KUWTK.

In the sweet clip shared to Khloé's Instagram Stories, a diaper-clad True excitedly stares and coos at the television screen featuring her "auntie" Kourtney Kardashian. “Is that Auntie Kourtney?” Kardashian asked a visibly thrilled True.

As the episode rolls on, the baby takes a break from her excited foot stomping and mini jumps to say "hi" to her family on the TV. But True says the "hi" like it's a question, signaling that she's unsure about what's going on.

In the next clip, Khloé senses her daughter's frustration, which prompts her to suggest a phone call to Kourtney and her kids.

Of course, True will get used to this phenomenon in time. Kourtney's 9-year-old son, for instance, definitely understands the concept of KUWTK now that he's a bit older.

“It’s funny now that Mason is getting older," Khloé said about the situation, according to People. “He knows. He doesn’t watch it, but I’ve heard him talk to his friends and say, ‘I’m on a TV show called Keeping Up with the Kardashians.’ I’m like, how does he know that?!”

As for filming the actual show, that topic is a tad more complicated. Kylie Jenner touched on this issue on an episode of Life of Kylie, rehashing her experience with starring on the series as a child.

“I started filming Keeping Up With the Kardashians when I was 9 years old. I don’t think any of us knew what we were getting ourselves into,” she shared, according to W magazine. “When you grow up on camera, everybody feels like they know you, but they don’t… I think a lot of people have misconceptions of who I am.”

Luckily, True has a vigilant mom who is all too aware of the pitfalls of fame.

"I feel a bit overwhelmed for my daughter already, gosh all the things I am going to have to control and filter out of her life," Khloé vented about the topic of raising True in the public eye, according to the Daily Mail.

For now, however, True is seemingly unaware of her family's show and she doesn't appear to understand why auntie Kourtney is on her TV screen. And this confusion paves the way for a lot of cuteness.