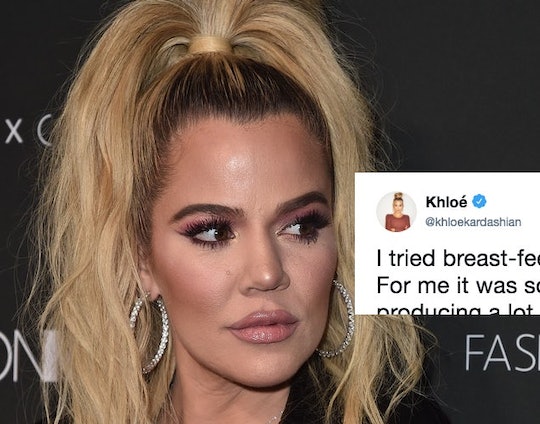 Khloé Kardashian Gets Candid About Why She Stopped Breastfeeding Baby True

Breastfeeding can be a beautiful bonding experience for mother and baby. But it can also be a frustrating exercise in futility when your body refuses to cooperate. In a series of tweets on Sunday, Khloé Kardashian explained why she stopped breastfeeding baby True and her experience is certainly a common one. Stress, combined with low milk supply led her to make the decision to supplement with formula, and both she and True are all the better for it.

Kardashian has been opening up more and more about her birth experience and the months that followed, according to People. When a fan Twitter account asked if breastfeeding was painful, Koko replied that breastfeeding didn't work out for her. "I tried breast-feeding for weeks and weeks! For me it was so painful but I also was not producing a lot of milk," she wrote. "So I had to pump every time she was napping."

She went on to explain that it could have been due to the stress that she experiencing at the time. “I guess due to stress my milk was not coming in. I tried and I just couldn’t give her enough. So I had to go to formula.” Considering the scandals and drama unfolding during and after True's birth, there's no doubt that her mama was stressed.

In a follow-up tweet, Kardashian explained that she turned to formula after trying every trick in the book to increase her supply:

Yes I tried literally EVERYTHING!! doctors came to check, I met with the lactation specialist, I did power pumping, I drink the tea, ate the cookies, did special massages etc. It just wasn’t working for me. Once True started loosing [sic] weight bc of it. I had to give her formula.

A number of fans replied to her tweet with their own breastfeeding experiences, leading Kardashian to explain why it was so hard for her, as SELF reported. “It was so frustrating because for Kourt it was soo easy for her to breastfeed,” she wrote. “My experience was very different."

No two women have the same experience with breastfeeding, so it isn't surprising that Khloé and her sister Kourtney Kardashian had different results. And the stress that Khloé feels impacted her supply is "the number one killer of breast milk supply, especially in the first few weeks after delivery," Dr. Shivani Patel, who specializes in maternal-fetal medicine, told Cosmopolitan. Baby Center, too, lists stress as potentially having a negative impact on milk flow and mother's breastfeeding journey.

Fortunately, a lot of that stress was lifted when Kardashian made the decision to switch to formula. In another tweet from July, she explained how she felt after stopping:

Oh my gosh I was the same!! I fought and fought to try and continue but then when I actually stopped, I didn’t realize what a relief it was for me to not stress and worry anymore. Any sec I had of downtime I was stressing to produce more for the next feeding.

As long and varied as the benefits of breastfeeding are, a baby needs a happy, healthy mom as much she needs nutrients. Formula-fed babies, like baby True, turn out just fine. And by making the decision to feed her baby what works best for both of them, Kardashian is able to care for herself as well as her little one. And that's all any parent can ask for.