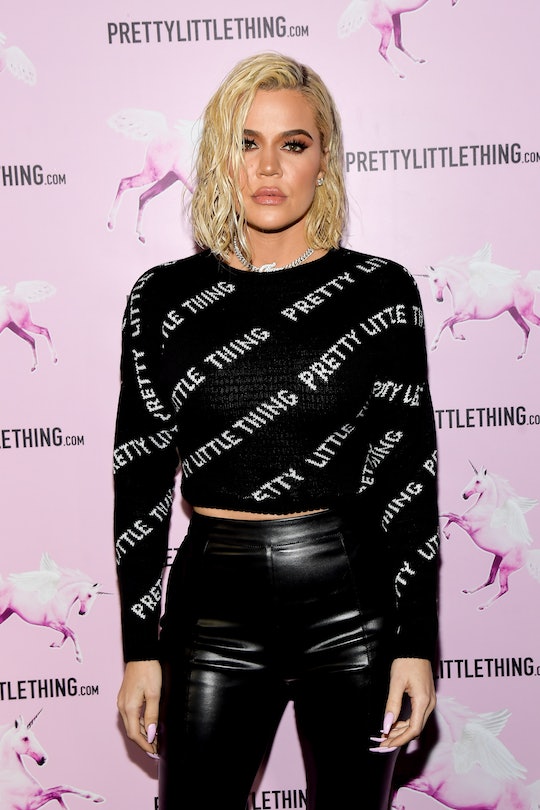 Love 'em or hate 'em, there's no denying the Kardashians are queens of social media. Their flawless photos, impeccable fashion sense, and knack for what's trendy has earned them millions of followers — along with serious endorsement deals — through the years. Many have speculated the Kar-Jenners' pictures are highly edited And you can bet plenty of naysayers have dragged them for reportedly going under the knife. However, Khloé Kardashian's new Instagram photo has some followers concernedbecause fans think she's not looking like herself anymore.

As OK! magazine reported, Khloé's Instagram followers had a lot of opinions about her look in a recent Instagram photo. On Friday, June 21, she posted a photo of herself that seemed to confuse plenty of Instagram users. Specifically, it was the Good American designer's nose that caught fans off guard. And they didn't hold back with their opinions.

Some people had to do a double take because they initially thought they were looking at a photo of Khloé's sister, Kim Kardashian. One follower wrote, "Is this Kim or Khloé I cant tell 😭."

Another person commented, "I thought this was Kim Kardashian."

Yet another fan confessed, "I honestly couldn’t tell which Kardashian this was for a moment, I had to look at the name."

Other commenters got straight to the point with zero sensitivity. One person wrote, "What happened to your nose? lmao."

Another Instagram user commented, "Giiiiirl I adore u but what the hell did you do to your nose."

Another Instagram follower lamented, "That’s not Khloé. Where is she?"

"I miss the old Khloé :(," yet another Instagram user wrote.

Still, not everyone was convinced plastic surgery was involved. One fan wrote, "Its all in the makeup. Come on yes she's pretty with or without it but if we all had people doing our makeup everyday we would look good and different all 🙂 no hating just saying." And you know, this person might not be too far off.

That's because this isn't the first time rumors about Khloé getting a nose job have circulated. It happened back in 2018, according to Allure, and the Keeping Up with the Kardashians star actually responded — and gave a reason for her different look. “One day, I think I’ll get one because I think about it every day. But I’m scared, so for now, it’s all about contour,” she wrote on Instagram last year.

Back in 2016, her sisters Kim and Kourtney called her out — and called her up — wondering about potential enhancements, according to HuffPost. "Khloé, I was going to call you and talk to you last night about this," Kim says to her younger sister over the phone. "Your whole face has changed. Did you do any filler?"

"No, I haven't!" Khloé responds incredulously.

It doesn't seem that Khloé has addressed these most recent rumors. Regardless, though, I'd like to point out something: It is in fact perfectly fine and OK if she has had some work done. She's a grown adult and is capable of making decisions about her body, after all.

Besides, Khloé make a valid point about plastic surgery in 2016. “I think plastic surgery should be viewed almost like makeup, because we’re all putting on a f*cking mask basically every day anyway," she told Cosmopolitan. "When you dye your hair, you’re changing who you are, and I don’t think there’s anything wrong with that. I think people should get plastic surgery or fillers or lasers or whatever if they want it — that should be your own personal decision.”

The moral of the story: So what if Khloé Kardashian had some work done? It's her decision to make — and if it makes her happy, then good for her. Or, perhaps she's just trying something different with her contouring. Either way, it would probably be best if Instagram took a deep breath and kept their opinions to themselves.