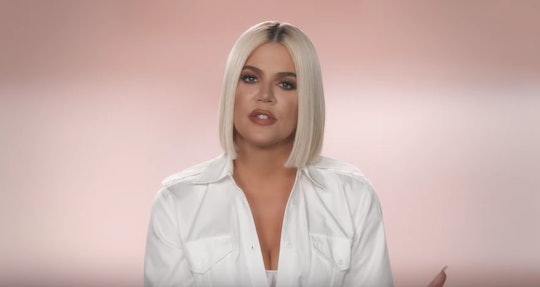 The Kardashian family is known for their strong personalities. After all, fans of Keeping Up With the Kardashians know the famous siblings aren't afraid to be expressive and it sounds like the youngest generation of Kardashians are taking after them. And, honestly, Khloé Kardashian's prediction about her daughter True's personality makes it sound like she's already totally fitting in with her aunts and grandma.

Fans of know that the KarJenner brood know they can and like to talk. The siblings are always chatting with each other about some new drama or project on the show and, TBH, fans can't get enough of it. The show is currently in its 16th season and isn't stopping any time soon. And perhaps Khloé Kardashian is most well known for speaking her mind on the show, and from the sounds of it, her 1-year-old daughter, True, is going to follow in her footsteps once she is able to hold full conversations.

True, who turned a year old in April (OMG) is "babbling like no other", according to Kardashian, as E! News reported, and is "really really close" to talking. And once she does start talking, it sounds like it will be so much fun for Kardashian. "I know she is never going to stop talking once she starts, but it's just so cute the little forms of communication she can do and everything for me is so rewarding," the proud mama told E! News.

Awwww. Parents have to wait so long for their children to really communicate how they feel or talk about what they want. So, it's super rewarding for parents when that day actually comes and their kids start forming their own personalities. You can really sense Kardashian's excitement about this.

In every single video Kardashian shares of her daughter with ex-boyfriend, Tristan Thompson, she gets even cuter. True seems like such a happy little girl who loves having fun and hanging out with her cousins that are her same age. In fact, Kardashian confirmed in a tweet earlier this month that True is one happy baby. When one Twitter user asked if True is a peaceful little kid or a crier, Kardashian had a very simple response to this inquiry. "She's honestly incredible," she replied. "Praise the lord!!" Awwwwww.

True is pretty much Kardashian's mini-me already. The little girl isn't afraid to be glamorous, loves playing dress up, and has even matched her mom on numerous occasions. In December 2018, Kardashian tweeted a fan, telling them that she had hoped that True would have her same personality, according to Us Weekly. If her daughter really does end up talking as much as she thinks she will, then she has nothing to worry about.

Even with all of the ups and downs in Kardashian's relationship with True's father, she told E! News that her life is perfect right now, and she's happy being a single mom to her little one. "Life is about ups and downs and I don't think I planned — obviously, I didn't plan for any of this to happen — but the beauty is we can survive anything in life and it's about a strong mindset and a good support system," she said. "Life is so great you just gotta find the beauty in it."

Having True by her side certainly doesn't hurt, either. Her little one is well on her way to growing up.