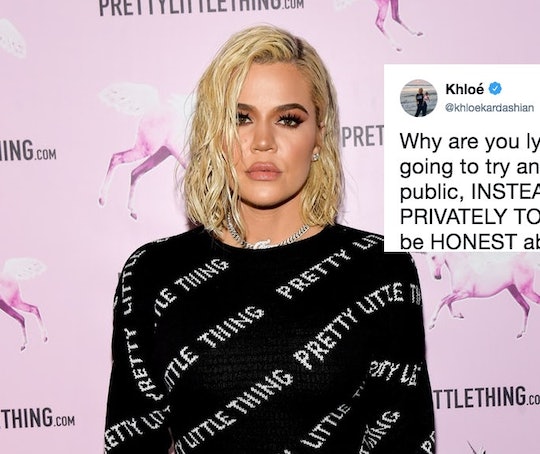 Oftentimes, feuds between celebs are kept somewhat quiet. Neither party goes on the record, so one or both sides of the argument remain rumor and speculation. The current conflict between Khloé Kardashian and Jordyn Woods is not one of those cases. In fact, Khloé Kardashian's reaction to Jordyn Woods' Red Table Talk interview doesn't mince words at all. She makes her stance on the whole Tristan Thompson-Jordyn Wood drama perfectly clear for anyone with questions.

Rumors began circulating that Thompson and Woods were reportedly involved earlier this week. But neither Kardashian and Thompson, nor Woods provided official or explicit comment on the rumor — until now. Woods appeared on Red Table Talk on Friday where she opened up about the her side of things. In the interview, Woods said that she was not to blame for issues between Kardashian and Thompson, according to Cosmopolitan. "I know I'm not the reason that Tristan and Khloé are not together," she said. "Now this situation may have made it harder for her to want to be with him, and I understand that, but I know I'm not the reason."

Wasting no time, Kardashian took to Twitter immediately after the interview to call Woods out for "lying publicly," about what happened.

Kardashian's first tweet was directed at Woods, asking her about what she said in the interview. "Why are you lying @jordynwoods ??," she wrote. "If you're going to try and save yourself by going public, INSTEAD OF CALLING ME PRIVATELY TO APOLOGIZE FIRST," at least be HONEST about your story. BTW, You ARE the reason my family broke up."

After that tweet, quite a few of her followers pointed out that it takes two to tango and Thompson was presumably involved as well. Less than 20 minutes after she posted her first tweet, Kardashian followed up with another tweet that addressed Thompson's role in the incident.

Along with stating that she was "not the reason that Tristan and Khloé are not together," Woods also stated in her interview that she and Thompson only kissed — nothing more — and the kiss meant nothing to her, according to Cosmopolitan. Additionally, Woods claimed to have apologized to Kardashian in person, according to E! News:

I did as much apologizing as I could do, over the phone, over texts. And until I get the opportunity to talk face-to-face 'cause she can really feel, you know, what I'm saying. but I, I reached out and the opportunity's there. I offered as much as I could. A lie detector test, anything. Whatever makes you feel better is what I want.

For her part, Woods doesn't blame Thompson or see him as being in the "wrong," according to People. She said as much during her Red Table Talk interview. "I allowed myself to be in that position and when alcohol is involved, people make dumb moves or people get caught up in the moment," she said.

Kardashian's tweets aren't the only response from the family following the allegations of infidelity were reported, according to E! News. Additionally, the Kardashian-Jenner family has completely cut Woods off following the news of her reported kiss with Thompson. Despite their stonewall, Woods stated in her interview that she is hopeful that she will be forgiven by the family down the line. "I'm not asking for people to like me," she said. "I'm not asking for you to forgive me overnight. I'm just asking for you to hear me and to feel me."

Judging by Kardashian's response to Woods' Red Table Talk interview, I doubt that a warm embrace and quick reconciliation are on the horizon. But at least both parties are talking about their feelings; that's progress, right?