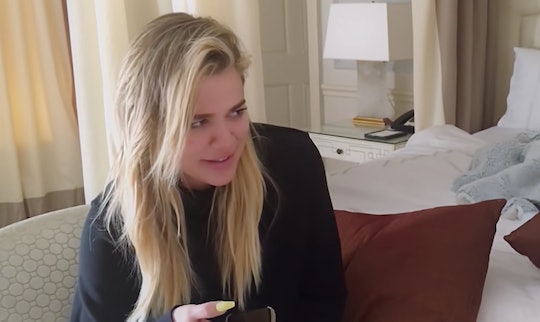 For many expectant couples, learning the sex of their baby is an emotionally-wrought experience. Whether they opt to find out the sex before their baby is born, or keep the news a surprise until delivery day, reactions can vary widely. And guys, it's completely OK either way. Some parents-to-be are elated to discover they're having the little boy or girl they've been daydreaming about for so long. Others? Well, let's just say that "gender" disappointment is a very real thing. And Khloé Kardashian's reaction to learning her baby's sex, as fans watched unfold on the finale of Keeping Up With The Kardashians, is actually something many parents can relate to.

On the most recent episode of KUWTK — which aired on Sunday — viewers finally learned the sex of Khloé and Tristan Thompson's first child together. In the scene, the expectant mama's little sister, Kylie Jenner, called her with the big news. Physically standing by her side were her other sisters, Kim and Kourtney Kardashian. Drum roll, please ... "You're having a girl!" Kylie announced to Khloé over the phone, to which Khloé promptly replied, "You're lying. Shut up."

"Why would I lie about this?" Kylie told Khloé, who seemed like she was trying (and failing) to keep her composure.

"I don't feel like I'm having a girl at all. I'm like in a state of shock," Khloé said to Kim and Kourtney.

Coming to her younger sister's rescue, Kim consoled a visibly upset Khloé. "This is so exciting," Kim said. "It's OK, I cried when I found out North was going to be a girl, too."

Watch the baby news begin to sink in for Khloé in the KUWTK clip, below.

Later on in the episode, as Us Weekly reported, Khloé explained why she reacted the way she did. “Everyone told me, ‘You’re going to feel what you’re having and you’ll just kind of know.’ And then when you find out it’s the complete opposite, it’s just a shock," she said. Khloé continued:

I just was convinced that I was having a boy, so to be having a girl, it’s just like, "OK, that wasn’t what I thought was going on."

It seems Khloé has a fresh perspective after the initial shock (and disappointment) of finding out she's having a girl has had a chance to wear off. "God give us what we need! His timing is never wrong! My hormones were IN RARE FORM for that news," she tweeted on Sunday. A couple of minutes later, Khloé followed up with, "I am now so excited my daughter will have forever best friends with Chicago and Stormi!! God is great!!! Thank you Lord for our princess."

Although some people may be quick to judge expectant parents for feeling sad about the sex of their baby, it's important to remember that gender disappointed is very real. “We assume gender disappointment is quite a hidden experience, yet it's extremely common especially in certain cultures,” Dr. Louann Brizendine, a neuropsychiatrist at UCSF and author of The Female Brain, told TODAY. “As many as 1 in 5 women express at least some disappointment about the sex of the child they are carrying.” So anyone bashing Kardashian for her feelings can seriously STFU.

To a certain degree, I can empathize with Khloé's reaction to finding out she's having a baby girl — except for me, it was the other way around. When I was pregnant with my first child, I was convinced I was carrying a baby girl, but nope. During the anatomy ultrasound, it was extremely clear that there was a baby boy floating around in there. I can't say I cried about it; I was pregnant with a healthy baby, after all. (Everyone experiences gender disappointment differently, though.) It's just that I grew up with sisters and the idea of raising a son was a bit daunting at first. Everything worked out in the end, however, and I had no trouble falling in love with my little guy after he was born.

I have a feeling that and reservations Khloé Kardashian may or may not still be having about expecting a daughter will melt away, too, once she's holding her baby girl in her arms. Thank you, Khloé, for sharing an honest glimpse into your pregnancy journey with us.