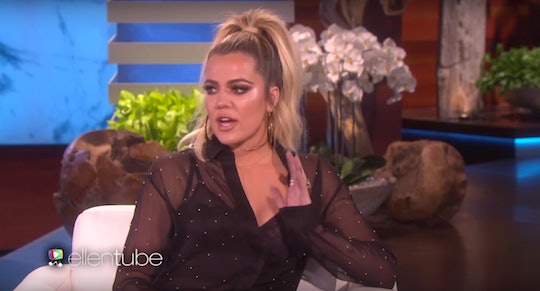 Khloe Kardashian's Update On Kim Is Heartbreaking But Definitely Promising

On Tuesday, Khloe Kardashian was the first family member to speak out about the estimated $10 million Parisian robbery Kim Kardashian faced recently. The very same one that ended up circulating every media outlet immediately after Kanye West stopped a concert to deal with a "family emergency." On Tuesday, Khloe appeared on Ellen and gave an update to the whole situation — because while the family is usually very public with fans, they have been understandably quiet during this. And while Khloe Kardashian's update on Kim is heartbreaking, there is a glimmer of hope, since we know that this is a family that sticks together in the most difficult times.

When Ellen Degeneres asked how Kim was doing on Ellen, Khloe responded "I mean, she's not doing that well." As soon as the words come out you can see the Kardashian's eyes fall to the floor. But after a beat, those same eyes shift back towards Ellen. This kind of brief physical moment says a lot about the Kardashians, namely, that they don't stay down for long.

"I mean it's incredibly traumatic what happened to her, but our family is super close and great and we'll get through it together, and we do appreciate all your guys' love and support, and it will take time."

There's no doubt that Kim will get back on her feet, she just needs a minute to process everything that went down — which is completely understandable. I mean I know it feels like an eternity to fans, but in reality, it's only been 10 days since the nightmarish incident. Crazy, right? It feels like it's been weeks to me.

Going back to Khloe, it's appropriate that she would be the one to break the family's silence since she has always been known as the strongest in the family. She always goes to bat for her sisters. We can see that through Twitter wars, and in Keeping Up With The Kardashians where she has practical cage matches with Scott (sister Kourtney's long-term boyfriend) anytime he's not acting right. On the reality show, Koko survives infidelity and rumors of her not being a Kardashian, a.k.a., she's strong as hell.

These examples make it more than obvious that "Khlo Money" has been put through the ringer, but still always manages to come out swinging. She is one tough cookie, and Kim is lucky to have a sister like her to lift her spirits, and snap her out of all the "emotional terror" she's dealing with. The two share the same upbringing and phoenix-like D.N.A., so if Khloe can constantly get back up, so can sister Kim.

"We're a family, we'll do this together" is one of Khloe's last comments on the matter. Just as Kevin Hart points out during the interview, the Kardashian clan "will stick together" and move on as a family.